1. The Fifty Minute Hour
2. Elementary Particles
3. Smiley Smiley
4. Strait is the Gate
5. Hearts and Harps
6. Warning Against Judging
a Christian Brother
7. If Only Your Heart Was a Major Sixth
8. Man Who Almost Was
9. Lover Becomes Lovers
10. Journey to the End of the Night
11. La Fin du Monde 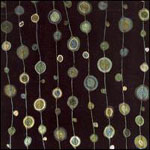 Despite its prominence as a visual genre, film is often a showcase for sound. Shins jokes aside, call any movie to mind and which moments are most vivid? Matt Damon driving up the highway to the tune of Elliott Smith’s “Miss Misery” in Good Will Hunting, perhaps, or Austin Powers strutting down a London street with Quincy Jones’ “Soul Bossa Nova” in tow. (Not to mention the pale main theme of Brokeback Mountain, though perhaps that’s more identifiable with Ryan Adams’ overtly similar “Carolina Rain.”) Score or soundtrack, music can manipulate emotions or just provide culture, era, context. Jon Brion, the pop impresario, makes music for films -- Brian Eno, who needs no introduction, made Music for Films. Hylozoists, then, are a combination of both: composers of orchestra-sized Brion-esque quirk that, like Eno’s work, soundtracks films that never were.

It’s left to the listener to fill in the blanks, though the Toronto band leaves plenty of visual cues. The old-time organ of “The Fifty Minute Hour” leads one into a black-and-white restaurant before the camera pans wide, unveiling winking, lipstick-painted women and cautious string arrangements. Settling into a Calexico-like groove, “Elementary Particles” would be straight spaghetti western if not for that vibraphone -- as is, it’s more Kokomo omelet. “Smiley Smiley” borrows carnival chord changes and Brion’s on-beat piano playing.

A smattering of vocal tracks feels a bit awkward in comparison. Adding singers to this music is like Bill Murray’s nameless, gag-laden character in The Lost City, Andy Garcia’s otherwise serious cinematic love letter to Havana: a concession, and an ineffective one. The singers don’t embarrass themselves, but with vocals that would’ve sounded humble in a rock context, there’s not much they can add. Thankfully, most of the album leaves things to the imagination.

La Fin du Monde shares more than a few traits in common with Broken Social Scene’s Feel Good Lost (2001), an expectation-free, instrument-based album written and recorded haphazardly but brilliantly by an all-star cast of Canadian musicians. Hylozoists claim members of the Weakerthans, Cuff the Duke, the defunct (but beloved!) Sea Snakes and, well, Broken Social Scene among their players; still, the album hardly sounds the product of disparate musicians. The best films are those in which the stars manage to damper their own distinct identities for the sake of the movie’s authenticity, and Hylozoists are nothing if not an ensemble cast.