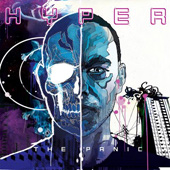 When a man called Hyper from a record label called Kilowatt announces he’s made his most devastating album to date, you expect noise. Noise would suffice for most people there. But not Guy Hatfield. His third album as Hyper breaks all known boundaries of speaker tolerance, and confirms the long-term effects of tinnitus impact from a lifetime of playing rock tracks at dance festivals. On his previous records, Hyper’s mix of angry guitars and techno synths was like a pumped up Carter USM: music to play while overtaking, with the lyrics there solely for screaming along to. On The Panic, he’s taken the same formula and fed it some Dr Jekyll medicine, producing tracks with enough rattle and firepower to place the military on high alert. Crossbreeding metal with dubstep might seem a conceptual faux pas to most people—the musical equivalent of putting on jeans with a suit jacket and then leaving the house—but if you’re a demolition worker who think nu-metal never went far enough, or just want to want to visit an alternate 2000 where Hybrid Theory got produced by Mary-Anne Hobbs, The Panic is for you.

If you’re a twee fan, though, fucking run. Whether you classify The Panic as evil hard rock or dubstep through guitar amplifiers, this is an album you can bring onto a building site and confidently play over power tools. The thumping, industrial grind of tracks like “My World,” with its random chants of “Fallback,” “Reload,” and “Firepower!” make it feel like the end credits to Universal Soldier. And just like action VHSs were all the rage before YouTube, helping people get their explosives fix, they’re hard to take seriously when presented in 2011. Hatfield shoves some trusty trance chords into his guitar overdrives, hoping to boost nostalgia, but you get the feeling this was all recorded during one big deliberate wink. It’s the same story on “Cheap Thrill”: three long minutes of playground antagonism, like the world’s most aggressive Jessie J mix. The fact that its chorus consists solely of the words “Pack my mephedrone” might seem a little irresponsible, but at least it knows its target audience. This is crowdsurfing fuel for kids whose knees mysteriously turn purple every weekend.

Between the drug binges and ear-destroying beats, however, Hatfield displays some in-depth genre knowledge, toning down the batterings to entice sane people to his party. There’s a reason he’s become known as the toast of Creamfields, and numbers like “Machine” are obviously it—the album’s poppiest moment, with a guaranteed profit in future car commercials thanks to the kidnapping of Lenny Kravitz’s session guitarist. “I’m just a machine / No one to help me / I’m just a machine / Do what you tell me,” brays Hatfield through a vocoder, the ethereal orgasms backing him on the mic causing The Panic‘s warmest moment. Elsewhere he experiments with a zombie concept, using film composer drones and bleak guitar to suggest the undead are coming to score Ecstasy. A Limp Bizkit riff swirls around “The End.” “Tear the Silence”‘s icy vocals scream for a redemptive hitman scene.

Mostly, though, The Panic is a knife-throwing, raucous massacre. I haven’t heard an album this vicious in years, which isn’t bad for someone who works with 18,000 dubstep fanatics. You get sirens, bass lockdowns, pulsars shrieking, and the world blowing up as Hatfield pushes you to the asylum. “Beyond the Rave” features interrupts only an electrohead would recognize as legitimate (others would think it’s just their CD laser failing); the title track’s “hoy-yoy-yoy” chorus should make you recall every Asian cartoon stereotype in existence. Most of the record itself is a cartoon, such as “Accelerates”’ bass guitar being doused in such excessive digital filth. But there’s always the chance it’s intended to be serious, and Hatfield’s using the noise/chaos/zombie notions to try and guess the future based on today. Bad idea. However prophetic it turns out to be, The Panic still sounds oddly out of date, going back again to those badly aged action-thriller films. And while Predator 2 looked cool when you were ten, and Danny Glover was blowing up squad cars, and aliens were taking on Jamaicans, there are slightly more eloquent ways than this to boldly announce “we’re fucked.”