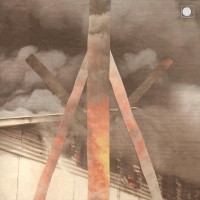 New Brigade is an alarmingly short and gritty record; calling it a full-length is at first grimace a bit of a stretch. Iceage’s first widely released collection of songs is instead made to be heard very quickly, with no time or breathing space for extended ruminations on what the fuck’s going on here, exactly—ideally you’re hearing this in one uninterrupted twenty-five minute rush, on the way to work, the dentist, or whatever erroneous “life commitments” you wish to escape/abhor—and when it’s finished, the mood really takes you away. There’s no wiggle room to let shit sit here.

The band effectively plays one note (post-punk emerging as if forced through a hardcore juicer), but they play it very, very well. Zero sense of these four Danish kids audibly stretching their toes. The “Intro” to New Brigade is really a series of feedback pulses fed into the rhythm of a marching band, leading into absolutely nothing, a one-second abyss, before the rest of the album proceeds to violently throttle any notion that this band could remain quiet for a single second longer.

So “White Rune”‘s the big song that the blogs have been all atwitter over, and it’s undoubtedly a good one. Mammoth chorus on the thing: sort of an anthem that might’ve a throw at sound-tracking future action and sport montages were it not for the fact that it’s played entirely atonal with a rhythm track that bristles instead of clicking into place, with guitars whose pick-ups—screw the plectrums being made out of rusty cheese graters—might be made of cheese graters themselves. Less successful, and sort of in the same “catchy” mold, is “Broken Bone,” which is just as deliberately fuzzed but loses traction when the band ambitiously welds a big sing-a-long to a skronky mid-eight which would sit nicely on a Brainiac record. My issue’s not with “Bone”‘s individual sections—the pop-hook’s phenomenal, and when this band plays batshit insane they really do fly—but the two strategies don’t vibrate in the same box as easily or playfully as maybe the band would like or let on. Which is OK when you’ve built up these massive hooks to support your sudden forays into noise-mongering, but when you haven’t built them up…well, then you get tracks like “Collapse,” or the weird “Never Return.” They’re not bad songs by any means—“Never Returns” does well to introduce a nice, slowed-down pace late into the record—but you get the sense of the band compromising a bit by trying to wedge these angular melodies into song shapes that demand desecration. They’re being too seriously-serious. Or in other words: they’re not having as much fun.

I love Iceage at their chaotic best; disintegration is this young band’s strongest suit, and when they give in to that destructive impulse the results are nothing short of fucking incendiary. Take the two-minute maybe-single “Remember,” for instance. It sports the record’s strongest hook—a guitar-slash that awkwardly scales a pop-punk melody; it sounds so sour and begrudging—until the thing collapses mid-ascent, all of a sudden, and quite entertainingly, into spastic drum clicks and a bass line picked straight out of the demo-tapes for Unknown Pleasures (1979). Of course that kind of chaos isn’t sustainable, not when you’re still shy of twenty years of age, not when the volume knob’s lodged appealingly into the reds. So the band switches it up again, not more than twenty seconds into this breakdown segue, re-assembling its chops for one final barrage from all the instruments. Elias Bender Ronnenfelt’s voice rips at the microphone like nothing matters, because nothing does when the universe is about to explosively pronounce the words fuck you, so why not channel it, since all our lives are so utterly pointless in the grand scheme of things, anyway?

In the scheme of things—you hear the four dudes of Iceage intone through miasmic feedback sludge—we are pointless noise-mongers without hope or McDonalds. And so the band re-assembles its chops for one final barrage, leaving the scary-bright last chords to ring out no longer than they need to. Which is two seconds. Probably the length of time it takes them to switch off that fucking hissy amplifier unit.

But this is where New Brigade really hits home: it demonstrates Iceage’s amazing ability to reconstitute itself in the flurry of the moment. A punk band with a Steely Dan fixation they most certainly are not, but in their best moments these kids do rouse something as opulently degenerate and self-destructively lax as the Dan’s cleanest work. They’re just coming at it all from a different point of view, with a different kind of skullfuckery.