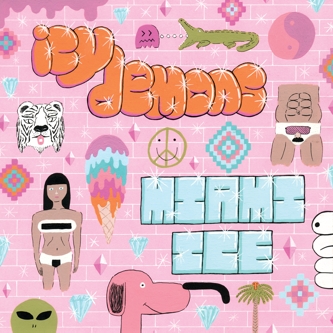 Egad: yet another form of entirely non-committal rock, one in which “acting like monkeys” (or calling oneself Icy Demons, or one’s album Miami Ice) is cheekiness as self-legitimization; is genre as permeable membrane and, naturally and without weight, something that treats statement as excess; is humor like a cellar full of preschool-dull toys, all blocky primary colors and blunted; is the pure joy of performance that posits itself above the overcomplicated methods of critical dissection, lyrical mass, and having the balls to be about something, but as such ends up inherently remote, cold, impersonal. This is yet more party music for unplugged appliances.

Icy Demons sound like they had a lot of fun making the music on Miami Ice, which is their third album in about as many years for about as many labels and, being a side-project for pretty much everyone involved, including principles Christopher Powell of Man Man and Griffin Rodriguez of Bablicon, understandably ensures as uninhibited a theme as any I’ve heard—if one could privilege the record with the cohesiveness of themes. There is surely nothing on Miami Ice that signifies anything other than the sonic presence it represents in the moment it blurts from your speakers like so much self-consciously styled indie. Being so undemanding means the album’s ideas are half-formed and repetitive, lacking depth, sleek echolalia for Man Man’s better-defined carnivalesque. Enjoyable in the moment, absolutely: like sowing one’s wild oats, maybe it’s a valuable experience if you haven’t done it before. For the rest of us, we deserve to have our dinner bought first.

Comparisons between Icy Demons and Man Man aren’t as superficial as they seem; Man Man aims celebratory instruments like telescopes at the sky, are subject to wonder and so exploration, and make surprising discoveries that each of their albums uncover and present as if not even responsible for them. Icy Demons take hold of those same telescopes, dial them down, tilt them akimbo, and capture a fuzzy shot of lawn mites. The thing feels like a Man Man iTunes exclusive EP or something, and who ever heard of those things being anything but free?

The album’s still impeccably recorded, with its sleek buzz, bright cymbals, and some genuinely harmonious, hypnotic tenors that cycle through the album’s top-loaded run time. The too-short, appetite-whetting “Buffalo Bill,” two-chord game of organ badminton “Miami Ice,” and the warm ping of “Summer Samba,” which is about as enjoyable, and dispensable, as You Forgot It in People‘s (2002) “Pacific Theme,” each have resonance and character wholly transcendent of the tossed-off manner in which the rest of the album sometimes seems to be conceived. The tones here are the true celebrities, more so than the performers of the songs, strangely. The crisp definition with which each of the songs’ elements is starkly rendered is the sort of thing that can deceivingly draw one towards the album, like some empty room blasted with air-conditioning until inhospitably cold. “Miami Ice” breaks into a lovable four-chord bridge and knowingly restrained snare pumping, and “1850” has some unbelievable bass lines to go along with one of the album’s first (and only) consciously eerie vibes. But there’s a poverty of ideas marring the rest of the songs and, at only nine tracks, the album as a whole.

There simply isn’t enough here, and what’s here is starved; Miami Ice is an undemanding, unexpectedly clinical listen, expertly performed if not conceived, and well worth a (few) close listen(s). But because it’s a band as talented as this, and because it’s their third album, I insist: complain to the kitchen and risk spit on your burger. It’ll happen at least half the time. The other half of the time, you’ll eat like a king, or at the very least know when it’s okay to say you’re still hungry.