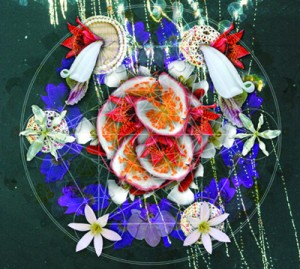 Playful, intelligent, and surprising, Ilad’s second album of semi-improv rock manages to hit a number of rock tropes and pleasure centers without ever quite seeming slavish to tradition. Sure, it hits a few walls along the way, pushing up against the inevitable and necessary limitations of its improv aspects, but Here/There greatly benefits from what seems like the band’s fundamental understanding that rock is about laying down a backbone of rhythm and groove and painting overtop.

Like Oneida’s staggering, confusing, proudly slipshod Rated O, Ilad dabble in psychedelica throughout while puncturing its vague seams with the occasional burst of cathartic energy. Perhaps also a bit like Rated O, the record might be victim to its own thesis. Oneida insisted on compartmentalizing their work into parts and releasing a behemoth equal parts alienating and engaging; Ilad seem dedicated to the unchanging idea of these rock songs: “Blackgold” sounds like it’s going to be a prospector hoedown and that’s exactly what it is; “Mexico” like a psych-out vacation jam; “I Just Stopped By” a sweet shuffle. “TV Sutra” speckles what sounds like spaced-out Beat poetry on its shaker hymnal. It’s tightly controlled, easily performed, and steadily enjoyable, but if you’re looking for formula-expanding experimentation you’ll be left staring at the coldly familiar. Given Ilad’s wheelhouse, it sounds like Here/There was a loyalist’s gesture.

Another question that the album begs: does improv ever work with lyrics? While the record is never the rock equivalent of freestyling, there are times when it seems like words are threaded awkwardly over repetition rather than the music being carefully built around a central and infectious melody. I didn’t hear one truly egregious sin of a lyric, which is more than I can say for a number of artists who treat their songwriting like the slow growth of a fickle plant—though the anti-war screed “Lou Dobbs” comes close a few times with some facile talk about propaganda, “send our money up your nose” and “our world’s problems can’t be solved with guns and tanks and bombs.” Ultimately the writing is the product of a multi-headed beast and, without putting too fine a point on it, some of the lyricists in this band are better than others.

But the listener is brought again to the group’s reliable vision of tailored pastiche and drowsy jams, the songs developing with balanced and accessible pace as each follows a sure pattern of careful first steps and elaboration. “I Just Stopped By” blossoms into a beauteous keyboard line that in turn blends into highlight “Wish For a Flood” and it’s jazz breakdown drums. “Extraordinary Machine” (no relation to the Fiona Apple album and track) is a gorgeous sort of plodding. Elsewhere the band is improv the way Yo La Tengo are improv: bass and drums do the same lovely things for a few minutes while the guitar and keys go for a walk. “I’m Not Mean” is parts congenial and haunting, relationship mix-tape fodder (it also evokes an old favorite, Seldom’s “I Love L.A.”). And all together, the album is long, meaty, and perfectly sequenced; for whatever picking one might do at individual passages the album amounts to a consistent and dynamic textural piece of art rock.