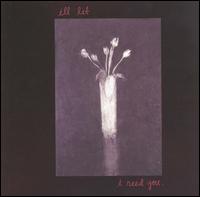 The story behind Ill Lit goes a little like this: friends Daniel Ahearn, Jens Fleming and Ben Provo were hanging out one summer night in their house in L.A and came up with an idea to form a collective involving all of their friends. They used their creative energy to shoot a couple of short films, but soon the friends separated to work on other projects. Every six months Daniel would drive back and forth from L.A to New York where he divided most of his time. A few years later, the friends reconnected to materialize Ill Lit, which is named after a book of poems by Franz Wright. In 2002, they released their debut album, WACMusic, to positive reviews. Their sophomore effort is I Need You, a contemplative and personal album that is a hybrid of folk, pop and country.

Ill Lit's sound is redolent of alt-country singer/songwriters Will Oldham, Hayden, Wilco and even, at times, the laid-back pop of Grandaddy. The first track, "Mid-City" (the location where the band recorded the album in L.A.), begins with a dolorous plea: "I hope you get better dear/cuz even east L.A is west of here." It's a decent opener, as the acoustic guitar guides the song along to an enjoyable semi-pop sound which highlights the introspective lyrics, which ruminate about universal themes like loneliness, love, death, sickness and the thought of good times fading away throughout the record. It isn't until the third track that the band's electronic sound comes into play; "Spring Chicken" is the most unique and intriguing song on the album, opening with a folky guitar before building to a chorus, climaxing with the unexpected utilization of keyboards. Though this electronic element only makes an occasional appearance on the record, I Need You could have certainly benefited from more frequent use of it considering how well it works when it's utilized.

On "Freeway," a pure-bred country tune, the band philosophizes about the personal journey one takes when traveling the road: "there's nothing worse than the chance you are not taking." Ill Lit write and perform very soulful and plaintive music, but on "Freeway," or most of the other songs for that matter, the music borders on becoming overly sentimental. The song ends with an instrumental sound effect of heavy keyboards keeping the usually dearth supply of electronic vibe alive. "Broken Open Fence" employs the piano, strings and guitar to form a lovely, yet almost pathetically Dashboard Confessional Emo-feel as Daniel stridently sings: "I'm always on the fence as a last defense in the argument that I can't start with you." "West" starts with a melancholy drone then picks up with a nice hum of a patriotic snare drum and becomes a more layered song with further explorations in rock instead of country.

Ill Lit has recorded an intimate album full of yearning and reflective songs derived from the experience of traveling not only the roads of America but life itself. To classify the band in a single genre would be difficult -- they move between folk, country and electronic-tinged pop, but always remain mellow and brooding. The pensive lyrics ("I want to visit the heaven of Fred Rogers and John Denver so I'll know things will get better when we die") create a palpable texture of place and time, but the band falters with an excessive amount of maudlin and heart-wrenching music. Still, the alluring sounds are ample to keep the band from completely swerving off the track.