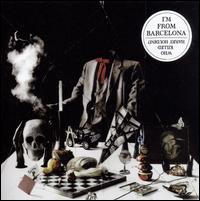 One of the most even-keeled, thought-provoking documentaries I’ve ever seen is also, without doubt, the most stomach-churning: HBO’s Chicken Hawk, a blunt inside look at the North American Man-Boy Love Assocation. Never aired by HBO, the film lives on via YouTube. It is drastic and illuminating and carried by the high-minded philosophizing of Leland Stevens, a be-sweatered pedophile with a sportscar and a glazed smile giddily recalling crimes too deplorable to really stick with here. Watch the documentary if you have further questions. I hate Leland Stevens—it’s the only logical response to his existence—but I’m also obsessed with him, the way he nervously turns away from the boy outside of the convenience store, the lucidity of his childlust, the delusional verbiage he employs in justification (“He was flirting with me!”).

I feel the same way about this band, repulsed but entranced by the existence of a sophomore record. Could I possibly hate it more than the debut? Attempting to give our readers a respite from my vitriol, I avoided the existence of this sophomore and sophomoric effort for months, offering the review to other critics at Cokemachineglow who summarily rejected the effort involved, by which I mean Googling it and stealing it. As the end of the year approached and it remained untouched by CMG, subsumed with hatred and self-loathing, I deigned to download it. Within moments of hitting play, I knew I had made a mistake. Or made no mistake, as it were: the band, though investing themselves in a “darker” sound, represented the same hollow, Godless impression of music as before.

Substance-free, without a whit of melody or lyricism or artistry but flouncing about in a post-production fantasia, the album made sounds that sounded like music for people who wanted to like music and have music playing near them but make no investment in the enjoyment of such stuff. This is the second most egregious of the band’s offenses (the third being sucking, and the first forthcoming): the strange way they represent the commodification of indie culture, like putting on aviator glasses and a trucker cap. The band’s music means nothing, signifies nothing; they are, merely, a band for people who want to like a band, made quirky (that is, indie) by their convenient Swedishness and inconvenient thirty-members-ness.

The songs defy interpretation or analysis. I’ll not waste our time. As before, “Andy” is about a guy named Andy, and so on. “Gunhild” goes nowhere, does nothing, and so on. The attempts at sonic expansion, like the guitar solos rearing garishly throughout “Rufus,” are as clownishly employed as everything else in the band’s grotesque affectation of sincerity, of music, of beauty. And so on. And on.

Surely, readers must say, returning to this band to shovel shit again is an exercise in critical indulgence, mean-spirited and churlish. To them I say: yes. But there is no band currently making music more deserving of this indulgence. They, like the pedophile Leland Stevens, sit with a glazed grin, grotesquely parodying sincerity and childishness for their own venal satisfaction. Like the pedophile Leland Stevens, who holds dual degrees in philosophy and religion, these adults abase actual music, employing all these instruments to make—poof! nothing. Who killed Harry Houdini? Probably someone who felt impotent in the face of his magic, attempting to prove the magician’s humanness. The only magic I’ve ever believed in is art, and this band is a punch in its sternum.