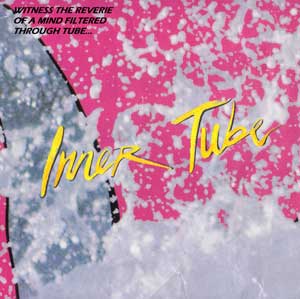 Mark McGuire treats each new record as though he’s a traveling circus act: why alter his signature guitar work for the sake of variety when he can pack it up wholesale and move to a different genre altogether, totally avoiding staleness in one broad step? So, after some drone-ish releases with Emeralds, after something of an indie rock release with Trouble Books, and after a few ambient records under his own name, here we are at Inner Tube, which seems to be McGuire’s attempt at lo-fi and garage rock.

What’s better (and perhaps unsurprising) is this foray proves to be fruitful in ways not found in his other releases; maybe, in fact, McGuire’s found a sound he may want to settle into. Save for the Emeralds-ish “Mr.,” Inner Tube exudes a calmness that’s never been much of a hallmark of his music (more like a coincidental symptom at times), his guitar work now just one integrated part of a complex mosaic, not a wildly writhing snake against a black background. In other words, this isn’t his best work (Emeralds FTW), but it’s easily his most fun.

Cast towards the horizon in an ocean of its own reverb, Inner Tube is the essence of its title: a lazy, directionless means of travel replete with its own beer koozie. On previous occasions, McGuire’s furious string work fashioned a net of noise which would slowly, even imperceptibly, until it was too late, constrict around the listener. Not so here; that net’s tied between two trees as a hammock. Take “Catch Vicelli,” backed by some healthy 80s nostalgia à la Games’ That We Can Play (2010), or really even most of what Daniel Lopatin loves, which reconstitutes itself as guitar parts overlap more and more, taking on physicality, texture: fluffy, saccharine, like cotton candy waiting to be picked off the stick. And like cotton candy, and beer koozies, and hammocks, and traveling circuses, and any part of your life that isn’t work, Inner Tube is all the elated bits of Ducktails, Beach Fossils, Ariel Pink, et al. without any “songwriting” or “lyrics” to worry about.

Which of course asks the listener to react cinematically: Inner Tube relishes in a sort of transportation, the listener welcome to simultaneously embrace both the stimulating and relaxing natures of the weed the listeners so obviously welcome and probably encouraged to smoke. Is it a coincidence, then, all of McGuire’s references to 1986 straight-to-VHS movie Spiker in tracks like “Catch Vicelli” and “Coach Doames” (and possibly in more, as I haven’t seen the movie myself? Probably. Though I know nothing about the character Doames, the so-named song has a sandy grittiness to it, a feeling like it could be taking place beachside or as a mirage, nothing but scrubs, buttes, and a single dusty road as real backdrop while other engaging images float at our periphery. Faisal? Not sure, but I can sure picture his pad, a certifiably chill spot so ‘80s it hurts: the song’s first half that of a wall of Apple Lisas humming; the second a similarly sized wall of amps droning in the same way. Best amongst these, though, is “Bali High,” its image not of anything specific but of some subjective point of recollection, an instance spent in the company of friends that seems to stand outside of time and space.

With the ease of an ad-libber crocheting blankets of sound on the spot—and who knows, maybe that’s exactly what he’s doing—McGuire and his newly fuzzed-out guitar have found themselves a surprisingly snug niche. Still possessing more than enough drama to avoid stagnation, as well as the steadfast professional moxie to eviscerate any boredom, McGuire manages to be largely passive; the listener isn’t jerked around, but left to enjoy the sensation of movement. No matter the shape his music takes on Inner Tube, as a constant he always seems—and thus this album always sounds—comfortable. Ever the nomad, Mark McGuire may have found himself a home.