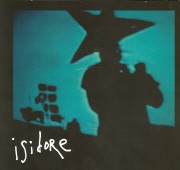 Oh so much noise has been made over The Postal Service --- indie pop wedded to glitch, you say? Surely not! And everyone exalted Ben Gibbard and Dntel for what turned out to be…an inconsistent, only sporadically excellent album. Frankly, both Death Cab for Cutie’s best moments, and Dntel’s landmark Life is Full of Possibilities, trumped Give Up.

More broo-ha-ha should be made for Isidore’s self-titled debut. Its creation follows the same lines as Gibbard/Tamborello’s mail-order back-and-forth songcraft, but, as opposed to The Postal Service’s debut, it’s better than either of its contributor’s bands: namely, Jeffrey Cain’s Remy Zero and Steve Kilbey’s Church. The crystallization of Cain and Kilbey’s collaboration (Kilbey on vox, Cain as arranger), is a meticulous effort, sharp in arrangement and lugubrious in emotional effect. It’s a dark, pop-twisted gem that shimmers and suffocates at once.

Folky vibes, acoustic guitars, cavernous synth swells, and poignant electric guitars forge an unholy union in Isidore’s melodic, blacklit church. The pairing of Kilbey’s frayed and hazed vocals with Cain’s delicate songs is a match made in the heaven of a slanted universe; Kilbey’s weary hurt bleeds into Cain’s instrumental smoky romanticism naturally and fluidly. The melodies, both vocal and instrumental, that the duo wed to their unique arrangements are often bulletproof, serving to ground the occasional sonic vertigo into which the album’s songs deliciously slip. “Sanskrit" (click to hear), the best example of that airtight marriage, finds its way through a dense landscape of synthetic strings, acoustic guitars, and programmed percussion by following the bright light of its sterling melody. Its chorus is a terrific swell of vocals and an electric guitar hook, and its deeply complex electronic-dominated bridge follows the song’s more organic choruses without any disjoint.

Ultimately, the duo’s careful choices are what really cement the strength of the album. “Transmigration”’s nearly-collapsing chorus melody not only requires careful attention from its listener, but its construction must have been similarly careful on Cain’s part. “Ghosting” makes a stylistic shuffle into Dntel-esque glitch pop, but wraps it around reverse-looped guitar bursts, and then unexpectedly shifts into a beautiful echoing piano-led chorus.

And thankfully, Kilbey avoids lyrical blunders like Gibbard’s painfully prominent “There was no mystery / About who shot John F. Kennedy.” Mostly he keeps to surreal images and deeply (but articulately expressed) emotions. On “Nothing New,” he hauntingly croons, “The feeling was absent / The red wine was blue / The gift is the present / But that’s nothing new to you / Oh now it’s all for nothing.”

Not only does Isidore sound as though Kilbey and Cain recorded it over months in the same studio, but its quality is nearly perfectly consistent. The duo break the hypnotic flow of the album only once, and it stands out the jarring point in the abum; on “CA. Redemption Value,” they open the track with a terrible semi-political monologue that’s proven completely unnecessary by the strength of the track’s ensuing arrangement. Kilbey does make up for the misstep with some biting lyrics (“Christ / I need some new advice / This is an old device / It’s for the lucky guys”), and helps to temper its impact on an otherwise strong whole.

All of which is merely more reason to hope that this apparent “one-off” project has a longer shelf-life than its initial conception would suggest. Thankfully, while we wait for The Postal Service to release something other than cash-milking singles from their two-year-old debut, Isidore’s self-titled should capture everyone’s attention as the superior collaboration. It doesn’t merely offer promise; it arrives fully-formed and confident, hefty in emotional impact and expert in execution.