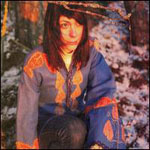 Fonal’s secret weapon, Merja Kokkonen is an oddity of the best kind. Mostly because she’s not really that odd, or rather the component parts of her music aren’t that odd, but they’re just slapped together in really odd ways. Take opener “Kutsukaa Sydãntã”: after a hilarious dark piano chord’s sustain is aborted when fingers leave the keys a fraction of a second before the next chord—creating a hollow moment of snark—the song combines a Tony Banks-like synth line (but, like the low part that’s usually embedded in the back of the mix that just gives color), some buzzing guitar notes, and some cyclic riffs on the higher registers of the piano. The resonance from the low piano chords creates tense music that plays on fractured, unfinished ideas. Halfway through a kick beats a few times; you’ll think the first time through that the song is going to pick up and move but after three or four hits it’s just gone. I’ll call this music abysmal, but I mean it like “abyssmal.” Of course, this isn’t just Scott Walker.

The organ on “Syndãnten Ahmija” gives a better clue to Kokkonen’s roots; the psychedelic/space riff is hard to ignore, though here the cyclic pace normally employed by bands like Pink Floyd to add an air of edge and mystery to their early music is here the lighter distraction from a series of fragmented saxophone blurbles, high pitched wines, and nervous piano. “Pysãhtyneet Planeetat” employs some synthetic whistling over a grungy bass line; the buzzing abstractions that define to outer range of the audio spectrum in Islaja’s music remain at the fringes through most of the track as Kokkonen sings in close with the bass. A violin plays a lovely decayed melody that joins in duet with Kokkonen’s increasingly filtered voice. “Pete P” starts relatively normal in contrast, Kokkonen singing in her enveloping voice over picked guitar and a nice little beat that sounds half ’60s and half Prefuse 73. But what’s really cool is that the percussive instruments sort of flit in and out. The song retains its momentum thanks to a walking bass line but the drums are implied; it’s hard to remember when they’ll come in or leave again, and so you always sort of hear them in your head. It’s a nauseating effect.

Kokkonen’s voice is front and center in this music (people compare her to Nico and Bjork but I’d say that what the whole package sounds like is somewhere closer to Tim Buckley mixed with the Charalambides); she’s got a gorgeous ability to dart around these messy arrangements with technically fascinating melodies and harmonies. She’s Finnish, so are her lyrics, and of course critics have jumped on the opportunity to drag out the old chestnut about being able to understand her emotion even as you can’t understand her words. Whatever: these are essentially pop songs run through a cheese grater. Consider “Muusimaa,” where the track opens like a field recording of a band warming up before Kokkonen really starts to put her Starsailor (1970) elocution lessons to good use. “Laulu Jo Menneestã,” where harmonies of Kokkonens establish her increasing gift for melody (something somewhat lacking on her two previous releases). The song is basically sign waves, ebow distortion, and pianos, but Kokkonen flits over top in anguish (and, seriously, doesn’t it sound hard to flit in anguish?).

I think “Varojokuvastin” will be the pundit’s pick; it opens with a clean guitar. Kokkonen’s strongest melody is complemented with male vocals, piano twinkles, distorted signals, and sampled vocals. It’s the most obviously accessible track here. “Muukalais-silmã” is my pick, though. It starts with what I think are some Finnish TV samples and a droning violin/guitar duet with some wild flute buried deep in the mix. Maybe some accordion too? Kokkonen is slow and deliberate through most of the track; however, as cacophonous percussive sounds slowly enter at the fringes they start to form a kind of beat. It’s an effect that could only be achieved on an album where every other moment where you thought this was going to happen didn’t, and so on this penultimate track the random noise actually does coalesce into something that propels the song forward.for about a minute, maybe. It’s a brilliant surprise, though. Closer “Suru ei” makes the always unfortunate mistake of fading out into five minutes of field recordings but I don’t fault Con Art (1998) for it so I guess I can’t fault Ulual YYY.

Psyche-driven or not, these are pop songs. They end up like objects with the consistency of cotton balls, ‘cept somebody has taken a pair of tweezers and removed bits so that any sense of popness is subverted by the missing links and clues to other sounds we never hear and in one simply majestic moment listening to stray noises slowly build into a mess of forward-moving percussion. Islaja as a concept is all about free association; your own preconceptions draw you into the music—this sad, sad music—and you’re stuck, searching for that one moment of sunlight to peek through. All Kokkonen is doing is playing you off against yourself.