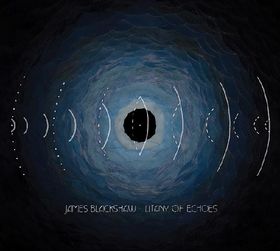 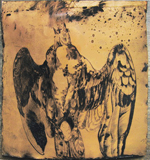 It’s helpful to compare the two to gain some context: Afro-beat experimentalists NOMO and 12-string guitar composer James Blackshaw, though wildly different in sound, have captivated me in recent years for exactly the same reasons. Each already has a well-defined, recognizable aesthetic, one they tweak and hone just enough with every release to keep those interested pining for more. Each willingly flaunts its canonical influences (for NOMO: Fela Kuti, Mulatu Astatke, and the Congotronics noise-mongerers; for Blackshaw: Fahey and his Takoma disciples, Philip Glass, Steve Reich, etc.) but synthesizes and toys with those bedrock foundations enough to rightfully claim a bit of artistic ownership. Innovation is something to strive for, but there’s something to be said for artists who so deftly summate the strengths of others while adding a page or two of their own to the book of, er, Greatness—and do so on such a regular basis.

The Glass Bead Game, more than any of his other releases, demonstrates this principle, one that single-handedly sustains Blackshaw’s body of work. Last year’s Litany of Echoes (2008) found the auteur embracing more overt manifestations of minimalism in the piano-based pieces that book-ended the album, yet those efforts felt largely removed from the expansive guitar pieces that comprised the album’s core. Here, we immediately get “Cross,” a stunning exercise in repetition in which the guitarist’s playing is propped up by cello and violin (courtesy of Current 93 members John Contreras and Joolie Wood, respectively) and buoyed by the vocals of Lavinia Blackwell, a part that could easily have been one of the titular count in Music for 18 Musicians (1978). Each of the adornments is fully integrated into the whole; nothing is tacked on or extraneous. Though Blackshaw has gussied up his guitar in this manner since practically the beginning, here the results sound more natural than ever.

Elsewhere, Blackshaw displays his growing talents for composing and performing terribly affecting piano pieces. “Fix” is straightforward, predictable, and yes, really fucking poignant; positioned in the album’s center, it breaks up the other four pieces subtly but assuredly. “Arc,” on the other hand, is simply epic; despite past attempts and fondles at such a thing, it’s the first time Blackshaw’s been able to play the piano in exactly the same way that he plays the guitar. The piece begins with a few slow, repeated phrases before barreling into a dizzying bout of endurance for a good ten minutes: the sustain pedal, allowing Blackshaw to watch notes tumble and collapse upon one another—a trick he’d long mastered on the guitar—creates a tunnel-like effect, a cavernous sound slowly evolving as he introduces little nuances and ripples into his playing.

Up until now I may have made The Glass Bead Game out to be a subtle re-invention of Blackshaw’s sound, which is partly true, but that belies how slowly and carefully he’s molded his approach to get to this point. The guitar-only pieces (“Key” and “Bled”) actually find the artist in stasis, executing perfectly his basement guitar-virtuoso aesthetic, though with less stunning results than in the past (The Cloud of Unknowing [2007] is still his high-watermark in acoustic showmanship). This is hardly a problem if the listener has the type of patience and appreciation for subtle micro-evolutions Blackshaw so clearly demonstrates and champions throughout his work. He’s on his way to building a grand monument to the craft he and so many before him have lovingly treated; he just needs to make sure each marble block is absolutely pristine before putting it down.