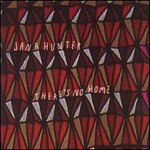 Jana Hunter's debut album -- 2005's Blank Unstaring Heirs of Doom -- was one of those albums that slipped through the cracks here at CMG. Despite having the best title of any album to emerge from the freak-folk scene (or, you know, 2005 in general), I somehow didn't manage to track it down till early 2006, at which point it seemed a bit late. It's a shame, because Doom was an impressive album, especially as a debut in a genre that, even back in '05, was starting to feel a bit played out. The dark, goth-tinged folk music that Hunter played made an impression both for its raw production values and the haunting quality of the music.

Two years later, released via the Devendra Banhart/Andy Cabic Gnomonsong label, Hunter brings us There's No Home. While tapping the same vein as its predecessor, Home is a considerably more polished, composed, and inviting record. Where Doom played up the spooky and unsettling, Home tones down the theatrics and lets Hunter shine as a songwriter. We don't get anything here as immediate and stunning as "Christmas," "Laughing & Crying," or "K," but we do get a much more consistent and, on the whole, impressive album.

If anything, this is actually sort of the album that many might have expected from Hunter to begin with. Her earliest success, on the Golden Apples of the Sun compilation, was the beautiful, pastoral "Farm, CA." That song felt out of place on Doom: too pretty and straight-forward amongst its strange, minimalist brethren. It'd be a natural inclusion on There's no Home, however. When There's No Home starts with the lovely "Palms," it's clear that Hunter has taken a different route. Gone are the lo-fi crackles and muddled vocals, letting her gentle finger-picking and simple, direct lyrics come to the fore. She more than justifies the production shift with songs like "Babies," "Vultures," and "Regardless," where her gift for melody and lyrical turns of phrase seem to put her closer to the abstraction and imagery of Nina Nastasia than the occasional banality and goofiness of Banhart.

The album is at its best in its closing run. The country-ish "Oracle" leads in well to the quiet, restrained "Recess," which in turn gives way to "Sirens," where Hunter's multi-tracked vocals and reverb-heavy guitar make for a gorgeous, hazy pairing. It's the sort of song that you'd love to hear Beach House cover, though Hunter handles it just fine by herself. "Sleep" goes back into the minor chords, letting the album conclude with the beautiful, complex title track. It's a great final third, and while not all the album manages to quite live up to the quality of these tracks, it's pretty indicative of Hunter's songwriting range and potential. She still has yet to manage a really killer album, but There's No Home finds Hunter well on her way.