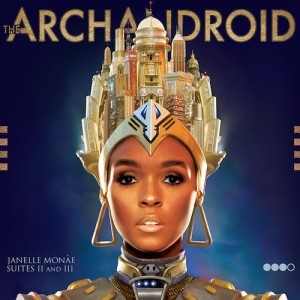 I like OutKast more than pretty much anyone else I have ever met, and I hang out pretty much exclusively with people who like OutKast, and the only reason I’m saying this upfront is because I need to confess something: I don’t really like Stankonia (2000). Like, it’s not that I don’t get it; I get it, I just don’t think it’s that great. (Trust that I’m really getting at why I love this Janelle Monáe record.) After OutKast, along with A Tribe Called Quest and Organized Konfusion and a few others, perfected sample-based hip-hop through 1996, the Atlantan duo stretched the form into its finest ever distillation on Aquemini (1998), a waterstone record that hip-hop musicians have been able to merely react to since its release. And so on Stankonia Big Boi and Andre did everything but straight hip-hop, applying their talent toward psych-funk and drum’n‘bass and late-‘90s chart-pop in a manner that was supremely impressive to people who don’t love hip-hop (see: highest Metascore ever by artists who aren’t old and white) but supremely unsatisfying for people who do love hip-hop, knowing as we do that these two men create the stuff as well, or better, than anyone else ever has.

Now, I want to leave my uncommon opinion of Stankonia out of this—let’s reify that I think the record is better than 99.99% of the other music humans have ever created—but critics have brought it into the conversation so repeatedly in regards to this record, and they have done so with good reason. That audacious, retro-futuristic, encyclopedia-thumbing feel is here, as is Big Boi himself, both in a big audible guest spot on the lead-off single and as the co-executive producer in the liner notes, along with the suddenly forward-thinking Diddy (for whom Jay Elect went to the mat on Gilles Petersen a few weeks ago, but that’s another issue). Slant, Pitchfork, Prefix, and a lot more (cough: me) have pointed to OutKast’s fourth full-length as the nearest cultural precedent for Monáe’s stylistically dazzling new record, which under the guise of a major label pop/R&B release also darts through glam, swing, J-Pop, pastoral folk and a whole lot more as a means of sci-fi sonic mind-blowing. So what if Monáe swaps out Kast’s Afrocentric 1970s cheese for a Fritz Lang/Ridley Scott sense of neo-noir: in almost every possible way, The ArchAndroid is an update of 2000’s freak flag-waving pop phantasmagoria.

Except it’s maybe better, “B.O.B.” notwithstanding. It’s here that my Aquemini fanboyishness really betrays itself, because Monáe’s big advantage here is that her release lacks direct precedent. Her debut EP feels intentionally slight, like a practice run for this album, whereas OutKast were sitting atop three universally praised LPs. Definitive LPs, as it were; genre-defining. But rather than rappers trying on every pop form they found interesting, looking for something new, Monáe comes across as simply a miraculously talented pop musician, a singer, dancer, fashionplate, and stage performer who on top of all of this can fucking rap, too!, as on the plainly ill robot-verse she spits on “Neon Valley Street.” On Aquemini (which I’m going to drop soon, I promise) the player and the poet tapped into their musical roots so wholly they formed a perfect artistic synthesis between past and present; Stankonia felt like odds and sods in its wake. Monáe’s stylistic schizophrenia comes across instead as merely evidence of a virtuoso, and more than a little bit like showing off, which I mean in the best possible way. Because it’s not really showing off when you fucking kill it.

There is, of course, the hook-laden single “Tightrope” and fellow pop cuts like sleek “Faster” and maddeningly catchy “Wondaland”; ethereal dissolutions like “Sir Greendown” and the lovely “Oh, Maker”; the sort of bafflingly convincing Malajube/Comets on Fire psych of “Mushrooms & Roses”; Steely Dan noodling on “Locked Inside”; the John Williams orchestral pomp of the overtures; and so, adjective-and-reference-point-filled, onward. But even when wearing these costumes they feel like just that—costumes—and so perhaps the overarching comparison, if we need to make one, is not to another pop album but to the most obvious place for mawkish stylistic mania and costume changes ahoy; that is, the Broadway musical, which she handily evokes on the frantic “Cold War” and bellowing spot-lit curtain call “BaBopBye Ya.” One can practically see distinct scene changes occurring throughout the histrionic “Come Alive.” (I feel like an enemy Cylon is probably playing those first guitar solos, and is then high-kicked off the stage with the aid of several thread-thin harnesses.)

It is impossible for me not to note that the record also contains an Of Montreal song—a band that, since I’m laying bare personal preferences today, I abhor—but of course it does: I don’t, after all, even like Broadway musicals that much. But so assured is Monáe’s presence throughout the record that even here she manages to largely submerge Kevin Barnes’ braying, idiotic musical sense. It’s a huge misstep (anything including Barnes is), but one that Solange desperately tried to beat Monáe to the punch on. But while erstwhile contemporary Solange still endears in interviews and occasionally delights musically, she has failed artistically thus far by doing exactly what Monáe’s detractors would have her do; that is, cohere. Sol-Angel and the Hadley St. Dreamers was an assured neo-soul record for an artist in Solange’s position to make, but the idea wore thin and the person beneath it all was likable but slight. In eschewing such sonic coherence entirely Monáe has bravely allowed all these genres, instead, to cohere around her.

She wears them magnificently. I don’t know what place there is for Monáe in 2010—she seems a shoo-in for sweeping the Grammys, at least—seemingly containing all the actual musical talent that the more divisive Lady Gaga or M.I.A. lack but perhaps also lacking their ability to throw a magnificently artful shitfit. As a possible auteur, Monáe feels on first blush as audacious and substantive as Kanye West but evincing a low-key cool in interviews. These are qualities which, coupled with The ArchAndroid‘s internal logic and overwhelming personality, recalls nothing so much as ’06 Lupe Fiasco: smart, funny, hopeful, well-backed and standing atop a remarkably appealing debut to back up all the bluster. This comparison does not, of course, bode well for her follow-up. But there is no logical place to be as a music fan right now but behind this artist. She is what we say we want. The ArchAndroid is not my favorite album of the year so far, but it is undoubtedly the best.