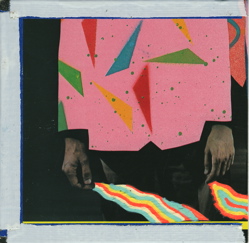 Rather than challenging preexisting notions of sampling-as-art-form or the intrinsic worth of pastiche (or whatever), Jamz n Jemz, Javelin’s beat-mongering debut, sets its gaze on humbler pursuits, documenting in the process just how far we’ve come in the democratization and decentralization of this particular art form. Herein witness 25 rag-tag clips of galloping 8-bit nostalgia and warped and diced samples from the four corners of the globe—all held together with shoestring, Big League Chew™ and (apparently) several boom boxes. So unabashedly DIY is their shtick that this shtick of a record, which these two Brooklynites have appropriately been distributing as a CD-R at their shows, might as well come packaged with a sticker slapped on top which reads, “Javelin make jams, and YOU can too!” Tony Robbins would be proud.

None of this is meant as a dig at the group, of course. The homegrown earthiness (all puns intended) of these fleeting tracks—which gambol through a mixed-medium (wood, plastic, corrugated metal, foam) playground’s worth of hip-hop, electro, and deep funk touchstones—is one of the album’s most charming qualities. There are gems here, but not of the polished sort; it’s as if the liberally applied “z”s of the album’s title signify, equally, the duo’s playful steez and the jagged, jolting quality of their music. Cousins George Langford and Tom Van Buskirk are clearly students of the unflaggingly popular/obligatory Dilla school, but don’t expect the kind of waxing and buffing that made Donuts (2006) nearly too slippery to grasp. “Too Many Feelings,” for one, coaxes quivering pleasures from a couple sampled vowels and fluttering guitar notes—a trick the late Detroit producer practically trademarked, yet here it’s thrust in our faces rather than allowed to unroll naturally. Elsewhere, their dusty pop samples serve merely as red herrings (“Leonard Pt. 6”) or pretty asides (“With Pleasure”) while the group focuses on more straightforward electro-jams.

Javelin has quite a bit brewing in its cauldron, and, suffice it to say, Jamz n Jemz is a pretty messy concoction. Indeed, the album’s biggest flaw by a long shot is its haphazard sequencing and jarring transitions. Given the right palette of sample-worthy material and synthesizers, almost anyone could produce something undeniably eclectic; the trick is weaving those disparate threads into something headier, coherent. Javelin approach the crate digger’s aesthetic in much the same way their formidable forebears (Avalanches, RJD2, Beck) have, adding a personal flair to well-worn classics and (more often) obscure diamonds in the rough, as their forebears were apt to do. (Their live-instrumentation-to-sample ratio is purportedly about 50/50.) This thing has plenty of hustle, but no flow, which is really too bad considering the obvious potential on display. Nowhere is this clearer than on the “STD Fury”/“Vibrationz” set. The former is the only potentially polarizing track here, a tongue-in-cheek PSA delivered by self-described “gonorrhealists” (I know, I know) “V” and “Muff Dive.” It’s a seemingly off-the-cuff joke fleshed out in the studio, so I’ll cut it some slack, but I could certainly do without the Sir-Mix-a-Lot reference. I mean, really? The latter, however, is an obvious highlight, a gauzy electro-pop anthem infused with years of house party revelry. It’s like Ratatat in an anti-gravity suit, and that should sound as awesome as I’m trying to make it.

Overall, Jamz and Jemz strikes a healthy balance between kitsch and inspiration, even if “Snoop” nearly tumbles to destruction as the group pairs middle eastern guitar with…“Drop It Like It’s Hot.” Thankfully, Javelin are not Girl Talk, nor do they want to be, and Jamz largely pleases with clever craftsmanship and a wry sense of humor, rarely pandering to the fickle blog-housers and their mash-up-for-the-sake-of apologists. I grin just thinking about how “Susie Cues” is what a hip-hop remix of Vince Guaraldi’s Peanuts soundtrack would sound like, or how there’s a track here named after vertically challenged QB Doug Flutey: Javelin’s obviously taking the piss, and while that carefree attitude may have resulted in a scatterbrained batch of slightly undercooked masterpieces, it’s thrilling to see their machinery going to work under the hood. And now that they’re on the rosters of Thrill Jockey and Luaka Bop, I see little holding them back. With a little bit of fine-tuning and perhaps a sagely nudging from David Byrne (ever the nudger), we could have a monstrous sophomore effort on our hands. Or stuffed coquettishly into our back pockets.