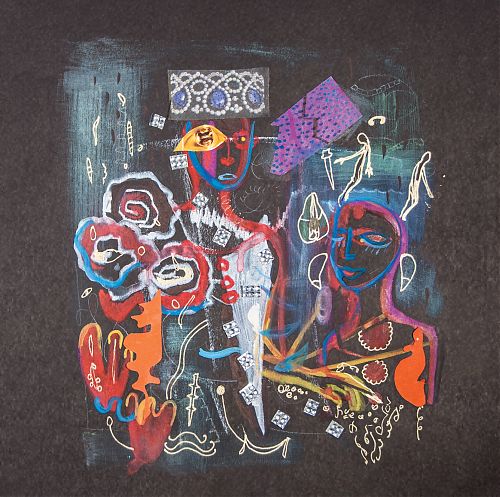 Jenny Gillespie’s Chamma is perhaps my new shining standard for a grower. And in more ways than one. “Organic” and its variations is a cliché in criticism but listen to this thing unfurl, bloom, get in your bloodstream; it will feel like something natural, something that makes you feel the better for it. Listen to Chamma once and you might end up non-plussed. There might be just enough to get you to come back once more—maybe in that juxtaposition of Americana with found sound and programming—and if you get to a third listen then the hooks dig in. The disc has barely left my stereo since.

If I was being glib, I’d call Gillespie a “neo-folk chanteuse,” you’d groan, and the conversation would end. Or I’d mention the heavy involvement and tangible influence of Califone’s Joe Adamik in the record’s percussion and overall sound and your interest might pique; but since Califone are so singular and so awesome, we’d probably just end up talking about them. So if you were here right now standing in front of me, I’d just make you listen to Chamma about half a dozen times in a row, until it had you, until you began to need it. Then I’d give you a copy for your own supply.

I won’t claim to be this record’s champion because what a pretentious position to take, right, but Gillespie has mentioned to CMG on Twitter that Chamma is proving divisive so far. And on one hand I completely understand that while with the other I’m pounding the podium stand and proclaiming it a damn shame. Chamma is the best record I’ve heard all year and if it had come out last year it’d be near the top. It is a vulnerable yet considered work and the fact that it’s unassuming on first blush makes it that much more endearing once you fall for it hard. It has truths to speak, though oft in tongues, and it treats music itself as something sacred, electronically processing old tomes simply as a way of preserving their freshness and relevance. I’d call it a spiritual but that’d turn too many of you off. So let’s just call it art that’s both mystic and felt, engaging for its ambiguity and advanced aesthetic limning of the rustic, but enrapturing for its clarity of mood and joie de vivre.

The book-ends are spectacular, opener “Holi” a light but intensely musical jaunt through folk tropes until Gillespie arrives at those final lines, filled with strange wonder and to which she brings just a pinch of Eastern inflection in her vocal: “And if you eat your shadow / No angel need ever nourish you.” The closer is a remix of “Holi” by electronic outfit MAKr, though really it’s a complete re-invention: a couple minutes blown up into seven that form a minimal monolith of haunting vocal drifts, a spine-shivering bass progression, and percussion so restrained that when a few extra hits happen at song’s end it has the effect that Neil Peart’s drum fills must dream of. Perhaps the greatest boon of MAKr’s remix to Chamma, though, is how—by slowing things down and spacing them out—it illustrates how thoughtful the melodies and elegant the structures of the songs that somewhat breezily preceded it.

Not that everything’s of the same variety, by any means. “Dirty Gold Parasol” is a pretty piece of melancholia with a sort of classically pleasing melody on the verses turning to something more unresolving on the chorus and all of it culminating in some heartbreaking lyrics: “No veil will be lifted / No bride kissed / No chance to be a mother / For this girl who loved kids.” Gillespie recently had a son, so one can only imagine the inspiration behind this song, yet it doesn’t change how deeply felt the song’s expression of that sadness seems. But then it’s followed up with “Dragon Mother,” bright, up-tempo, and inventive. Later on “Lift the Collar” seems to meld the best of both worlds, keening in its melody but sprightly in its beat while its repetitive lyrical conceit delivers something memorable, which is a very good thing since the content strikes of insight: “The devil has got you / Like a little doll on a string / But it’s a thin one / And you could break loose / If you really wanted to.”

Indubitably, though, the centerpiece of Chamma is “Epiphanee.” Without its instrumental coda it would be a wonderful contemporary folk song. With that coda it is one of the musical highlights of the first half of 2014, a gorgeous swell of strings (courtesy of arranger Arnulf Lindner) giving footing to an ululation that sounds sampled from a bygone era—intimate yet ineffable in its familiarity. In and of itself this would be a bracing passage, but in the body of Chamma it is paramount; it is a musical moment that describes its record’s purpose and muse, and to me that’s to show the roots of current music in a way that the two things, antiquity and modernity, are superimposed, and to find a brand of subtle beauty in that while meaning flits on the edges of what’s cryptic and what’s prophetic. There is nothing post-modern about Chamma, really, it’s just that it very much lives in its moment while its moment reaches back in time to its ancestry. Its memory is rich, its treatment of those memories reverent, and its expression potent in its ability to engulf us. The more the record spins, the more we spin with it, our reverie deepening.

Penultimate track “Child of the Universe” might have the hippiest dippiest title this side of the Flaming Lips but it grabs you instantly, some simple but gleaming guitar work from Emmett Kelly pinning down your ears while Gillespie’s voice, as always, handles her poetry with delicate but decisive care. This is what it might sound like if a flower child woke up to face the post-millenial pall and decided to write something real. Peace, love, vibrant living color…the sentiment and ideals remain but Gillespie’s take seems to realize that on the larger, practical, political scale there is an inevitability of decay and corruption and too many games that end in zero sums. “Who provides food for the sacrifice / Is it you, is it you? / I’ll promptly don my savior robes / And bust into the place / And say choose another meal now.”

So on “Child of the Universe” it all becomes personal, owned by the individual. Elements of uncertainty are introduced while the material of this ideology is smelted and reforged, its edge sharpened fervently, until Gillespie lifts a blade that flashes brilliance. “Let your guard down / Let your guard down,” she beckons the so-called child of the universe as the lush arrangement behind her longingly seeks out its grace notes, stretching the measures. And we let our guard down; then Chamma runs us through and we accept it. Past and present, intoxicatingly intertwined, come rushing in. That’s when the “Holi” remix magnifies the moment into eternity and back, back to the beginning, our listening device looping, and we let Chamma play again. Again and again. And so it grows.