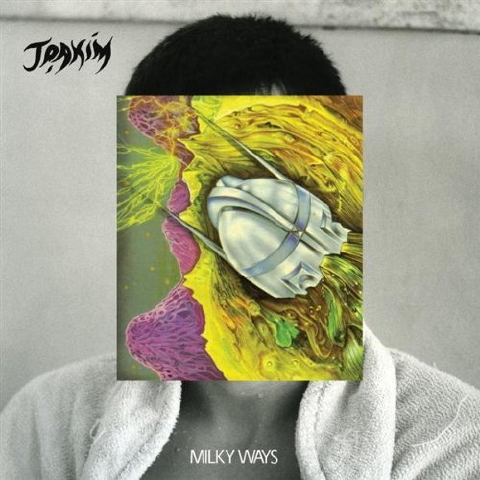 French DJ and dance music auteur Joakim Bouaziz has the sort of left-field instincts for which Girl Talk can only pine. His vaunted steez—that of melding the most ass-shakingly raucous elements of rock and disco—is nothing to gasp at on paper, yet his preternatural ability to mash the slick with the inane, usually to brilliant results, makes him a rare prize. He is not, mercifully, a pastiche whore, nor is he a mere receptacle of dance music esoterica and archeological fodder; he does not make blog house; he spurns your “acid” tags with a detached cool. He is, however, a scholar of classical piano and of Gang of Four (and all loud points in between) and though his art is as much about twisting and, let’s say, disrespecting his forebears as it is collecting and assembling their work in odd, and often amusing, patterns, at no point does his latest Milky Ways ever sound gratuitous, overstuffed, or illogical. The album is something of a roller-coaster ride through funk, punk, house, disco, and krautrock, geeked on eyebrow raising dynamic shifts and hairpin turns, but these are fully-formed pop songs more than anything else, together manifesting as an inspirationally cohesive album given how it, on paper, hop-scotches haphazardly through more genres than my feeble mind would care to align.

If that opening paragraph didn’t tip you off, it’s difficult to pin this down as “dance music” anyhow, except perhaps by dwelling on the verb at hand. Still, I know precedent when I hear it: Milky Ways jams and jingles with the radical, kitchen-sink attitude of Rumpelzirkus (2007), though its foundation lies more in the thick grooves of Italo and disco than the micro-rhythms of house. And while Kalabrese’s opus made liberal use of disparate instruments and textures within a relatively well-defined framework, Milky Ways provides no such template—hell, it takes about eight minutes into this affair to really get a hint at what’s going on. Opening with disorienting loops of burbling keyboards, blabbering voices, and (apparently) a marching band, “Back to Wilderness” is quite the misdirecting tease. But that’s only the beginning; the majority of the track is essentially one hulking crescendo of crunching guitars and merciless percussion, driven to an almost comically anarchic finale. One can’t help but imagine Joakim chuckling in the studio as the slippery, relatively diminutive “Ad Me” kicks in immediately after. Cheeky bastard.

And I haven’t even mentioned “Spiders,” a veritable patchwork of old school synth arpeggios, throbbing bass, and hi-hats. Joakim has commented that a “good” beat is one that could be a track on its own; “Spiders” has about three good beats, though “killer” seems more appropriate: this is a shit-hot, manic track. Once again, concept and anthem commingle fruitfully, one never constraining or detracting from the other. As in: it all sounds so easy—like, of course those dueling electric guitars are the next natural step after the track’s first half completes its sparkling ascent. Seldom have I witnessed this type of conceptual and aesthetic synergy (as if the two are separate, which they really aren’t) in such a delicious package since, you guessed it, Kalabrese (“Hide,” to be specific). At the moment, and as year-end lists draw nigh, I can’t think of higher praise.

Suffice it to say, Milky Ways covers more territory than a dance album of its ilk rightfully should, though it never really clings to that designation in the first place and struggles to fit into any sensible line of kin. It’s no wonder that, after a barn-burning first half, Joakim mixes in some lighter, mid-tempo fluff as a respite. The slightly goofy, vocoder’d “Glossy Papers” fits the bill, but even that ends in a riptide of metal riffage. Though a whole album’s worth of uncompromising dancefloor jams would be ideal, Joakim is hardly one to wed himself to any goal for more than three minutes or so. While this approach may irk at times, begging for attention and eclipsing something that could boast a more pleasurable arc throughout its running time—anyone but the most ardent supporter of the oversexed ape may have trouble relating to the plodding dirge of “King Kong Is Dead”—it’s what keeps Joakim’s oeuvre so engaging and so surprising until he finds another thousand or so uneven sounds to empirically dissect and get to the heart of.