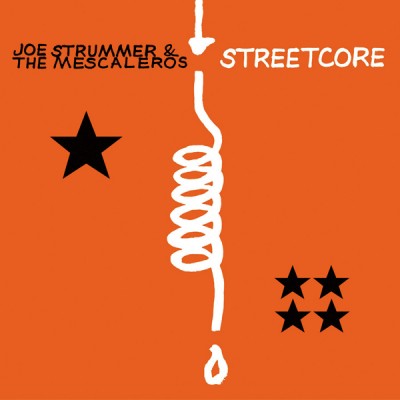 It’s always difficult to review an album by an artist held in such high esteem as Joe Strummer, especially if the artist is no longer with us (those who have to review the forthcoming Johnny Cash 5-disc retrospective will be in for quite an ordeal I should imagine). Occasionally, however, these artists live up to the esteem awarded to them and produce an album the caliber of Streetcore —which, while not being a brilliant album, is still quite good. Showing much of the world music and modern influence that has always informed his work, Streetcore is able to blend these elements with the straight-up rock that brought Strummer his fame (certainly more successfully than some of the early Mescaleros albums).

The album immediately pulls you in with the single, "Coma Girl." Opening with a driving rhythm guitar and Strummer’s voice, the track explodes into a full-fledged rock song —a celebration of youth and the rock festival system in Britain. The world music influence becomes apparent on the second track, "Get Down Moses," with its deep, fuzzed out bass lines and reggae beat. On "Long Shadow," Strummer’s ode to Johnny Cash and the cowboy lifestyle of the American West, we get just Strummer and his acoustic guitar. The track hasn’t been cleaned up much, and the simple beauty of the song is at times startling.

"Arms Aloft" is strong, though I can’t help but that think that a more complete knowledge of Aberdeen might help me better appreciate it. The frantic chorus plays well off the more subdued verses, and does a better job of it than the similar "All in a Day." "Ramshackle Day Parade," Strummer’s reflection on 9/11, is another solid track, though it lacks the catch of "Long Shadow" and the production could have been stripped down somewhat.

And this brings us to the song you’ll be hearing on your local college radio stations —"Redemption Song." Strummer’s cover of the Bob Marley classic is terrific, capturing the emotional weight of the original. (Remember kids, Strummer covered the song with Johnny Cash too, and that cut, bound to be excellent, is on the American retrospective coming out in the next few months).

"Burning Streets" is a commentary on the modern London, something of an updated "London Calling." It opens with a backward playing bit of guitar and grows into one of the more interesting and compelling songs on the album. Strummer’s radio shows for the BBC are the source of inspiration for "Midnight Jam," a cut put together by the Mescaleros and composed of snippets from old radio shows accompanied by the band, well, jamming. It’s not a horribly interesting track, and certainly not original. The album closes with a second cover, "Silver and Gold" (Bobby Charles’s "Before I Grow Old") which comes off as particularly poignant.

Basically, I can’t find any major fault with the record. It is by no means a London Calling, but it’s certainly Strummer’s best album since the Clash parted ways in 1986. It tends to lack a sense of continuity, and the production is poor on some of the tracks, but the slightly frayed feeling of the unpolished "Redemption Song" and "Long Shadow" (both Rick Rubin produced) more than make up for that. Really, Strummer’s final word on "Silver and Gold," directed at the engineer sum it up nicely: "Okay. That’s a take." A finished Streetcore would have been a terrific album, but we’ll have to make do with what’s been left, and you’re certainly getting you money’s worth.