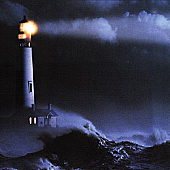 We Must Become the Pitiless Censors of Ourselves

It’s hard to tell whether or not John Maus is to be taken at face value. On record, his work is a dense collage of post-punk and synth-pop signifiers that evoke distance, alienation, and intense longing, with sometimes only a handful of words left at all intelligible. Live, he plays up his music’s melodrama to an extreme that has to be seen to be believed, towering above his audience as he screams, howls, slams the microphone against his heart, and works very hard to engage onlookers despite simply singing over backing tracks, expending as much energy as humanly possible to compensate for what could be seen as half-assed or apathetic. We Must Become the Pitiless Censors of Ourselves, title lifted from Alain Badiou’s “Fifteen Theses on Contemporary Art,” sees Maus distance himself from the anthemic qualities of Love is Real (2007) in favor of more complicated songs with harsher, hazier production, a short collection of echo-laden shrines to ambiguous emotions as in line with his largely Los Angeles-based peers as they are out of step with pop convention.

To do so, he splits his new songs less by alternating between slow and fast or noisy and clean than by crafting explorations of overt harmony and disarming dissonance. This is immediately apparent with the opening one-two punch of “Streetlight”‘s space-disco arpeggiators and the cacophonous theremin freakout at the center of “Quantum Leap,” a song which otherwise pushes at uptempo Joy Division in its rhythm section until that moment tears it in two to striking effect. His leanings toward insular dance music are manifested in songs like “Keep Pushing On” and “Head for the Country,” both of which sport go-for-broke choruses deliberately defused by Maus’s vocal performances, by turns muted and unconventional.

This is not, however, an outright rejection of accessibility. A slight reworking of Molly Nilsson’s “Hey Moon” opens as if presenting a reunion between two people who once meant much to each other, but then reveals itself as a song sung by two voices in which its narrator spends a night alone. In doing so, he pushes at isolation as a universal human experience, transforming the sentiment at its center while only giving it a bit more focus. Album closer “Believer” evokes not Joy Division but New Order, its overwhelmingly loud textures and slower rhythms swallowing his vocals almost whole.

If anything here will serve to confirm Maus the eccentric, it’s “Cop Killer” and “Matter of Fact,” the few songs where his singing communicates a message immediately. In the former, it’s a statement so simple—“Cop killer, kill every cop in sight”—that to give it any thought seems a waste of time, even if its creator insists that the song is about killing the police in one’s mind, a revolt against internal restriction more than a call to murder. The latter is one sentiment and one sentiment only—“Pussy is not a matter of fact”—and it leaves an impression, but finds no point from which it expands, leaving it bordering on novelty.

As a whole, We Must Become the Pitiless Censors of Ourselves doesn’t necessarily offer the highs of his past two albums, or something as immediate as “Rights for Gays,” but it is a remarkably cohesive listen. Maus’ pop doesn’t necessarily provide answers for itself, but it isn’t totally unwelcoming, and the in-between space has very real appeal. If nothing else, it’s proof that this sound hasn’t played out in the last several years despite his peers’ newfound success, and certainly more than strong enough to make watching him sing really, really hard over it a good time.