1. Into Midnight
2. Blue Crescent Vision
3. Candlelight Mirage
4. Desert Flight
5. Embers at Dusk
6. Into the Black Mesa
7. Beyond the Veil 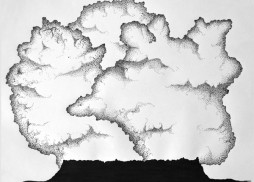 On the surface, there’s very little that Jon Porras’ Black Mesa and Dustin Wong’s Dreams Say, View, Create, Shadow Leads have in common. They’re both works for solo guitar. They’re both on Thrill Jockey. (Who, it’s got to be said, is putting out records of solo guitar at a time when most labels are trying to recoup basic pressing costs with t-shirts sales. Kudos to them for stubbornly sticking to their aesthetic guns.) I guess that’s about it.

Incredible, then, that such disparate work can come from a single instrument, as if reasserting the vital flexibility of a guitar in the right hands. Listen to these two albums, both quite good, side by side. Wong’s guitar work is polyphonic, Porras’ a monologue. Where Wong constructs busy arrangements of crystalline intensity, Porras lets the lone, meditative note hang ambient and dreadful in space. Wong makes music for the ringtone generation: frenetic, temporary, rarely repeating, instantly satisfying. Black Mesa romanticizes something old or lost. Each is more suggestive of entire worlds than most “and-the-kitchen-sink’ laptop pop.

What Black Mesa reminds me of most are those long minutes of guitar in isolation that would precede Godspeed You! Black Emperor’s cyclical build, or perhaps Neil Young’s Dead Man soundtrack (1995). Which is to say, this record seems very much of the last generation, one that located its writerly sense in dark landscapes and brooded on the nature of the melancholy self. Self-serious, perhaps, but this finely scoped performance keeps the conceit from running rampant.

The writing around the record also talks about land, physical space, and isolation: “Black Mesa is a reflection on desolation and the search for light in a barren land,” says its accompanying bio, and (believe it or not), “The album follows an outlaw wanderer who ventures deep into the desert only to discover the Black Mesa, a bridge between worlds (as related to string theory or multiverse theory).” Our more cynical tendencies (the part of us that secretly likes Vampire Weekend) might scoff at this, but I love the rich, Americana textuality evoked here, the pulp self-awareness.

I read no contemporary, political commentary in Black Mesa, but it certainly fits the mood of Primary season. What better time than this, when Americans are struggling to find some semblance of affinity for potential leaders, to fantasize about the desert outlaw—the dead man—searching for some existential possibility or bridge to more appealing truths. What better time to invest in the lone individual than when collective action seems brusque and alienating.

As far as drone or ambient records go, Black Mesa is accessible and melodious. “Into Midnight” and “Into the Black Mesa” act as a recurring theme, but beyond that it’s only the album’s warm guitar tone and sparse arrangements that tie it together. There are no great patches of dissonance or noise to contend with. “Blue Crescent Vision” lays over some small complimentary guitar work, and that’s all it needs. And in that, Black Mesa speaks to some traditional core at the center of ambient’s evolution as a genre. Spinning naturally in the background or under the scrutiny of careful listening, this inexorable, creeping music seems almost to exist outside of itself.

Anachronistic in its psychedelic fantasies, unstylish in the scope of its sounds, Black Mesa embodies its themes of departure and isolation by sounding like a record out of time. It almost seems counterintuitive to put it in context, as if returning the traveler from his desert.