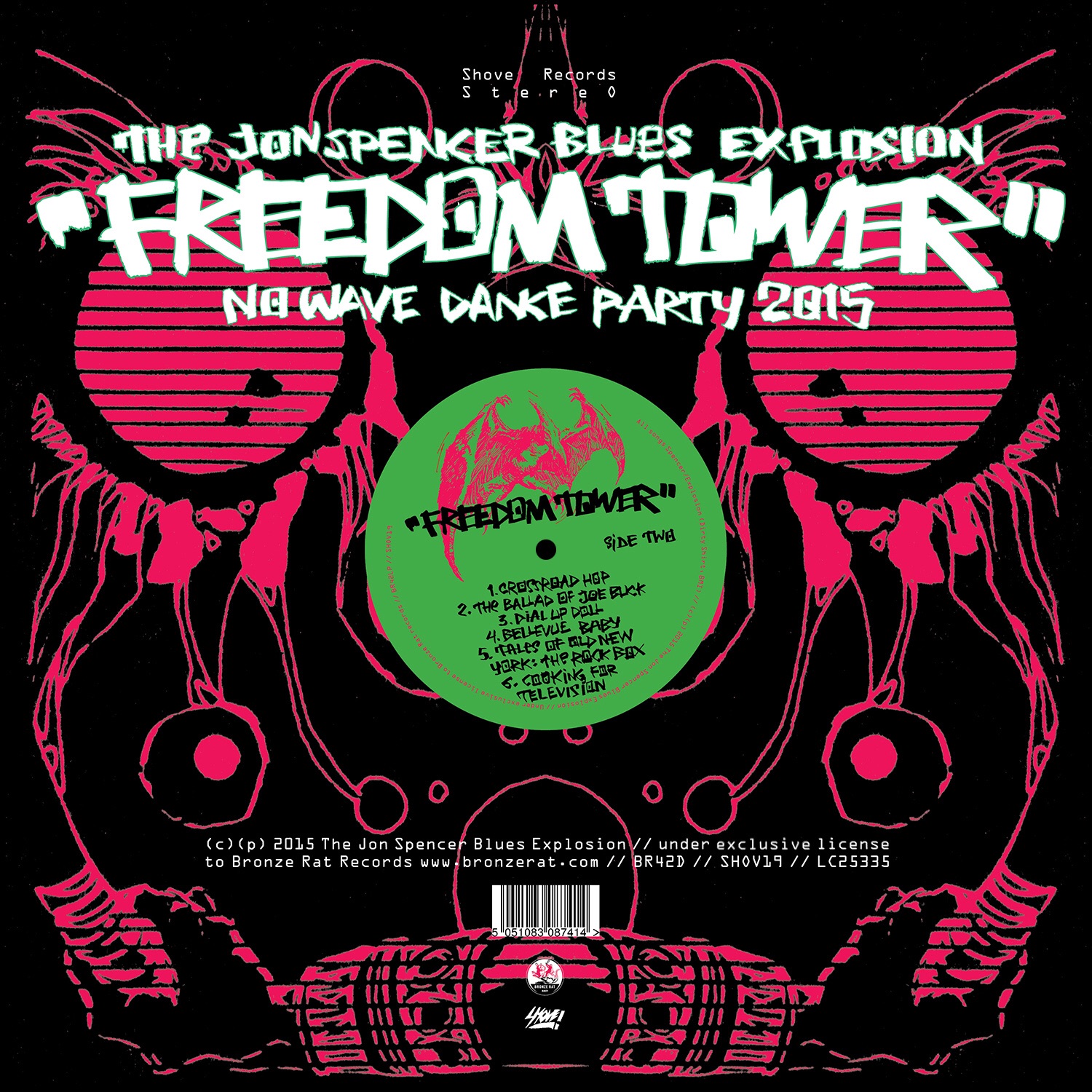 “Blues X Man” was the first Jon Spencer Blues Explosion song I ever fell in love with. In three and a half minutes it manages to capture all that’s great and unique about this bombastic, shit-stirring band: Jon Spencer’s strutting, self-conscious rock star persona; Judah Bauer’s electro-shock guitar; Russel Simins’ zero-to-sixty drumming. It’s sparse and creepy through the verses while Spencer spits pseudo-angry rants against telemarketers and Jehovah’s witnesses: “Don’t call me after twelve ’cuz that’s when I’m a-layin’ in bed home with the wife,” he explains, roaring, “I don’t want that bother!” It’s ridiculous, absurdly charming, and when the chorus screeches into action with one of the band’s finest sing-a-longs (“Don’t ya! / Want a! / Man like a! / Blues Explosion!”), it turns into a genuine, balls-to-the-wall rock song, slapped together from the detritus of American music. The parts are all there, but they don’t exactly fit together recognizably.

“Blues X Man” is a track buried deep in the heart of Orange, which, alongside Acme, is the latest in a series of reissues of the band’s out-of-print 1990s discography, a series, it seems, dedicated to securing the Jon Spencer Blues Explosion’s reputation as one of the most important genre-melding indie rock bands of the ’90s. From their inception in 1990 (after the demise of Spencer’s legendary Pussy Galore) through seven studio albums, they covered a lot of sonic territory: frantic, howling psychobilly, crunchy soul, guttural rock, and swaggering party cuts. Though their tendency to play with and exaggerate rock ’n roll/blues clichés has been occasionally met with confusion and criticism, Spencer, Bauer, and Simins built a loyal fan base by showing no allegiance to a trendy alt-rock climate, instead committing themselves to truly unhinged live shows. Over a decade later, Orange and Acme still represent JSBX’s ability to twist a generous handful of dying tropes into something alive, and joyful—and cruel.

Spencer’s left nothing wanting: both collections here offer two jam-packed discs and detailed liner notes with band interviews, photos, and tributes. Disc One of Orange contains the full album plus some bonus tracks and remixes, and Disc Two is the 1995 Experimental Remixes EP, a more beat-heavy re-imagining of album tracks courtesy of Beck, Mike D, GZA, Moby, and others. Taken on its own, Orange is an exhilarating example of the Jon Spencer Blues Explosion hitting their stride. They know what they’re about, and for a thrilling LP-long moment manage to fall in step with their audience and with each other, no indication whatsoever of their latent turmoil (Judah Bauer’s drug problem required an intervention during Orange sessions).

The album opens with “Bellbottoms,” a disco-soul mutant unlike any other Blues Explosion song, and Spencer pushes his sick MC persona even further, turning radio announcer one moment, preacher the next. Orange is a party album, and its hip-hop-inspired name-checking and empty boasting reach a peak on songs like “Sweat” (“That’s the sweat / Of the Blues Explosion!”) and the crazed yelp of “Flavor.” “Cowboy” and “Brenda” find Spencer edging further into his half-whiny, half-tough Mick Jagger character, oozing nonsense over some of Bauer’s best guitar work. It’s the sound of a band that’s seasoned but not jaded, inspired but working pretty hard too.

The second disc of Orange takes some adjustment, simply because it’s so different from the original album: most of it remixes the band beyond recognition, latching on to one lacerating groove or vocal tick. Plus it’s not all that exciting. The Beck track sounds like Beck, the Moby like Moby, and the GZA track like…well, even Spencer admits in the liner notes that he felt “let down” by that one. But the remixes serve to remind fans just how much goes into each Blues Explosion song; stripped down and taken apart, a Blues Explosion song still sounds like more well-orchestrated noise than three guys should be able to make.

Acme, similarly, features the album on the first disc and a previously released collection, Xtra Acme, on Disc Two. Acme is similar to Orange in tone, though it’s less representative of the band due to the tidiness of the production. Spencer’s vocals are front and center, Bauer’s guitar chimes brightly, and things feel generally saner. Which is kind of a disappointment. Not that there aren’t great tracks: “Magical Colors” is probably the catchiest groove JSBX has ever written; “High Gear” indulges Spencer’s rockabilly leanings (and has lyrics about possum guts on the road, which, come on); “Talk About the Blues” packs enough cocksure pomp to silence all the critics with its “I don’t play no blues / I play rock ’n roll!” refrain.

The Acme reissue has more material overall, with some extra remixes on Disc One (the raucous “Hell” and “Bacon” being highlights), and Xtra Acme—charming, funny, and relaxed—is a bigger treat than Experimental Remixes. For “Magical Colors (31 Flavors)” Spencer mines innuendos past the point of meaning, like listing condiments over a verse before purring, “I want to eat a hot dog with you, baby.” Other highlights include “Leave Me Alone So I Can Rock Again,” a nostalgic number about Spencer’s musical influences (also: “I grew up with three witches and a giant / Cock-a-doodle-do”), and “Chowder,” which flat-out indulges fans dying to hear that bloooooze explosion one more time before album’s end.

Jon Spencer Blues Explosion was an entirely different animal from a lot of the bands making a name for themselves in the 1990s: instead of spearheading a movement, they crunched all available movements together into their own psycho-rock planet. It’s a planet some may find hard to inhabit; though Orange and Acme represent JSBX’s most popular and accessible material, the degree to which JSBX was ever accessible is up for debate. Orange and Acme offer a pretty good place to start. It may not be easy, but given time, their lush globe turns out a pretty awesome place to be.