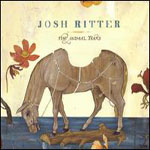 Tweet
Josh Ritter is a clever dude. Basically, the idea seems to take the vulture’s route — take the best elements of Woody Guthrie, the simplest lyrical styles of Bob Dylan, and a delivery that alternately mimics Ryan Adams, Neil Young, and Johnny Cash, and then just mush it all together and figure/ hope that no one really cares. Personally, I wouldn’t mind too much, except that the sheer hollowness and opportunism of the amalgam really strikes me the wrong way. Guess you could call me picky.

Ritter shows his hand very clearly on album opener “Girl in the War,” a typically nonsensical bit of tripe that he furiously tries to instill with meaning. The formula is easy: biblical reference + love interest + god-awful string section swells = sure-fire Josh Ritter hit. Try it at home kids; we here at CMG recommend exploring the book of Job — tragically overlooked in the indie realm. For further help, give a listen to “Monster Ballads,” “Good Man,” and the behemoth “Thin Blue Flame.”

The funny thing is, if Ritter would just shut up for awhile, there might be decent songs under a lot of these tracks. V2 has brought in Brian Deck of Califone/Red Red Meat fame to run the boards and play the drums, and his clear-minded production is the saving grace of The Animal Years. Unfortunately, Ritter seems unable to leave any space without his presence. Sure, he has a nice voice — at times even quite expressive — but his lyrical content is just so brutally dull and brazenly derivative that it’s really hard to listen for more than a few songs.

This isn't to say that the record doesn’t have its moments, it’s just that they tend to be few and far between. “Monster Ballads” fits the Ritter formula perfectly, but Deck builds the song lovingly and it fares reasonably well for it. On the other end of the spectrum, the blatantly Guthrie-esque “Idaho” takes the stripped-down approach and Ritter is able to sell the song on the strength of a surprisingly earnest delivery.

No review of the album can help but mention the 800-pound gorilla that is “Thin Blue Flame.” Clocking in at an easy 9:38 the song towers over everything on the album, trying to make up for what it lacks in quality with sheer quantity. It comes close; while Ritter’s ideas and lyrical images are muddled and confused, Deck’s booming production lends the song a gravitas it has no business possessing. Closer “Here at the Right Time” does much better. Ritter’s light, rolling piano melody and sincere delivery sell the song far better than the biblical allusions and histrionics he employs throughout the rest of the album ever could.

Josh Ritter clearly has potential. His previous albums have shown the same spark, but with The Animal Years, he’s simply taking himself too seriously. He establishes grand lyrical arches, overworked symbols, and Deep Meaning. Problem is, he forgets any of the emotion, realism, or originality that would make anyone care.