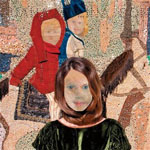 Even for those of us who really enjoy Juana Molina and her fuzzed out electro-folk, the artist tends to be a bit of a cipher. Not only is the language gap an issue (though even for Spanish speakers this can be a bit far out there), there’s just the sense that she’s on an entirely different page than everybody else. Her slow, lilting songs aren’t really headed anywhere, and there’s no discernible larger message to her music, but at the same time it has a sort of ethereal beauty that distinguishes it easily from pretty much anything else out there. You always know when you’re listening to a Juana Molina track, and it’s usually pretty pleasant.

The success of Molina’s work has always been due as much to her beautiful, perfectly modulated voice as to her flawless incorporation of electronic elements into what amounts to folk music. None of the post-folk musicians here in the States have had nearly as much success adding the sort of subtle, carefully layered elements as Molina, not that many have even necessarily tried. On the title track we get the quiet, creepy organ and bells; on “Malerhido” it’s full on synth tracks and fuzzed out drums; on “Yo No” it’s vocal manipulation and those crashing waves of metallic noise. Everywhere little pieces of unnatural noise spring up, add a little something, and fade back into the song just as naturally as a stray guitar part or drum solo.

If anything, this approach encapsulates the central idea or aim of Son: finding a balance between the natural and the intrusions of the modern world’s gizmos and gadgets. Nowhere do we hear this more clearly than on “La Verdad.” Molina plays a quiet guitar line under field recordings of bird calls, weaving in what sounds for all the world like a pair of slow-building drum tracks; one human-played and the other it’s electronic doppelganger. What’s important, though, is not that’s it’s theoretically interesting, but that it’s absolutely gorgeous, easily the best track on the album. When she multitracks out her voice half-way through the song and starts chopping it up and recycling it back into itself you can’t help but think that Kieran Hebden ought to be taking notes.

Of course, the same problems crop up on Son that have emerged on past albums. With three tracks over six minutes, you get the feeling that Molina often doesn’t know when to quit with a song. Even “La Verdad” has a vocal coda that could have been sliced down, and the slow vocal games of the last three minutes of “Hay Que Ver Si Voy” don’t add much, if anything, to the song. “Un Beso Llega,” with Molina’s crazy scat-singing middle section becomes more experimental (in a good way) as it heads past the five-minute mark, but the last minute of the song is unnecessary and more distracting than interesting.

Molina also runs up against the common complaint with her music. Even with the gorgeous multitracked chorus on “No Seas Antipatica” or the straight-forward guitar-focused folk of “Rio Seco” there’s never much of a hook to Molina’s music. Without attention and focus it’s easy to see it as little more than above-average musak. When I used “ethereal” to describe Molina’s music, I quite meant it; there’s very little to get attached to here. Son strikes me as even more experimental than Tres Cosas, and as such it’s less interested than that record on really opening itself up to the listener. That may be a good thing, admirable even, but it doesn’t stop the whole thing from feeling a little cold at first listen. Given time, though, and a willingness to put up with, or even revel in Molina’s idiosyncrasies and games, Son does reveal itself as quite a pretty little record.