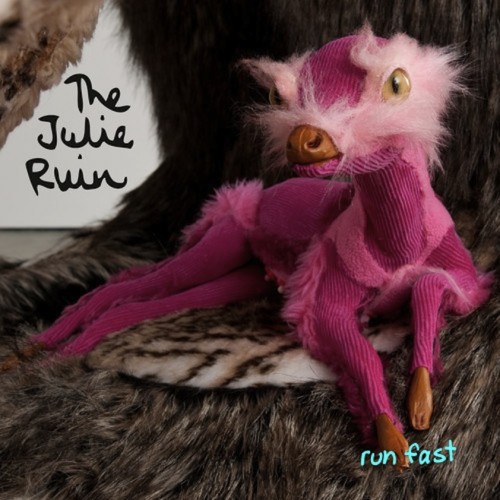 “What happens when you’re not twenty but forty-one / And you have to sink in to the you, you’ve now become / Will the teenage sneer you cultivated / Sneer back at you and make you feel so hated?” This verse, from “Goodnight Goodbye” off of the Julie Ruin’s Run Fast, could be a direct descriptor for the record itself, both in impetus and content. As Kathleen Hanna’s first album in nine years, and one produced while she was struggling with Lyme disease, Run Fast is the work of someone taking stock. Hanna is evaluating what came before, while also attempting to “sink in” to the artist she has become. The result is 110% a Kathleen Hanna record (in spite of a few contributions from bandmate Kenny Mellman), riot grrrl Hanna and party girl Hanna and teenaged Hanna and middle-aged Hanna, all mixed together and tossed like confetti. Run Fast has many moments of darkness, but ultimately it’s a celebration: of growing up, of surviving, of wading through shit and coming out the other side.

Though it retains the same name as Hanna’s 1997 solo project, the new Julie Ruin finds Hanna with a five-person band, including Kenny Mellman, who co-wrote the record, and Hanna’s Bikini Kill bandmate Kathi Wilcox. The band is tight and somewhat innocuous, backing Hanna’s strong-as-ever vocals with pulsing synths and dark shards of guitar. There are shades of Le Tigre here, but Run Fast is more of a rock record—not as gritty as Bikini Kill but retaining a certain dark sparseness. Though some of Run Fast’s more introspective songs are downright restrained, particularly “Goodnight Goodbye” and the fantastically catchy, James Murphy-produced love song “Just My Kind,” Hanna remains unafraid to be the loud girl at the party. She’s most memorable at her most aggressive, as on the stupidly catchy kiss-off “Ha Ha Ha” when she pummels us over and over: “Ha ha ha ha Armageddon!” The record’s only missteps occur when Mellman takes the mic, particularly on his own song, “South Coast Plaza,” a lyrically sharp coming of age song that suffers from his fumbling delivery and a flat melody. Though it’s just one song, “South Coast Plaza” has the unfortunate effect of diluting Run Fast’s B-side; it’s a detour that removes us, however briefly, from Hanna’s live-wire energy.

As is clear in songs like “Ha Ha Ha,” and the almost desperately manic “Party City,” Run Fast is, like most of Hanna’s work, raucous and upbeat and fun to listen to. It’s a very good record in terms of pure melody, variety and exuberance, but turn to the lyrics and you also have an interesting portrait of an artist coming to grips with aging and a somewhat awkward legacy—as Hanna recently explained to Kim Gordon in Bust, “I don’t have any money, and everybody is telling me what an icon I am.” Run Fast is surely the result of Hanna’s creative desire to return to music, but it’s also a reminder that she is, in fact, a working musician. This is her career, and now that—as Hanna put it in Bust, “I lived”—it’s time to get back to it.

As expected, Hanna’s recent health problems—a long struggle and eventual diagnosis of Lyme disease—come up implicitly in places (“Goodnight Goodbye” and “Stop Stop,” where Hanna wails, “Oh God I’m getting so tired / I can’t breathe and I know I’m gonna die now”), and elsewhere there’s a clear desire to reflect. This is clear on “Kids in NY” a somewhat half-hearted attempt to pass the buck to a new generation, claiming, winkingly, “Nostalgia’s so passé,” as well as “Girls Like Us” and the fantastic “Run Fast,” album-closing anthems sure to please any Bikini Kill fan. Backed by a chintzy ’80s synth, “Girls Like Us” runs down a list of characteristics beginning with the somehow perfect “Girls like us like cotton candy, plastic handbags, alcohol.” “Run Fast” goes further to provide an abbreviated summary of Hanna’s own youth—or at least that of a girl like her. “We smoked pin joints under fluorescent lights / And wore shorts at the beach just to hide our thighs,” she sings, before jumping ahead: “Years later we’d be told that we weren’t real punks / By boys in bands who acted like our dads when they were drunk.”

It’s not that the words or the sentiment of “Run Fast” is so new, but to hear the passion with which Hanna shouts them, it’s clear she still feels the pain from these wounds, as should we all, even after she’s gone. Thankfully, Run Fast is not likely to be Hanna’s swan song. But it’s certainly a worthwhile place to start her career afresh if she chooses, free to move forward after so much time spent searching, archiving, and summing up the past.