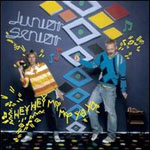 Hey Hey My My Yo Yo

This will be quick and painless, because dwelling on any one gimmick, one obnoxious lyric, one superb, unexpected moment, or three hiccupped, horseteeth syllables is bound to reflect bad posture, and I’m going to need a strong back for this one.

To say that Junior Senior is more than the sum of its parts is an understatement; Junior Senior’s parts are the ephemera of a coke-fueled decade, tight and juicy orifices pumping post-punk-new-wave-candy-funk with no regard for whatever culture they’re blemishing or whosever shame they’re butchering. Hey Hey My My Yo Yo, the duo’s second album -- out since June in Denmark, without a date in North America -- makes good on all expectations set by its predecessor, a record that was of similar Voltron satisfaction, more hearts than heads, feet most of all. But, HHMMYY works by forcing the personas of gay/straight, big/tiny, bearman/squeaky into a sparkly corner, paying no mind to the titular re-re-repetition of one empty lyric after another, and fusing the coquetries in irresistibly succinct dance songs.

I suggest a quick purge. OK, nothing bulimic, maybe more along the lines of a fast, abstaining from the morbid analytical rigor deserving of something… not… Junior Senior. In favor, I’ll say, of placating the primal axes in our bodies. Lyrics, emotional stagnation, restless bombast, unadulterated dunderheadedness: these things can’t just be forgiven, but they can be sidestepped, because HHMMYY’s melodies, beats, and cosmic synths are breakneck brilliant.

“Take My Time,” “tin roof, rusted” with Cindy Wilson and Kate Pierson from the B-52’s, is a great example of how thoroughly Jesper (Junior) Mortensen and Jespe Breum (Senior) Larsen can vilify malignant blowhards barking of irresponsibility and whitewash already bleached Cyndi Lauper detritus. A chirpy bassline maintains shaded cool under dainty upon dainty electro-chimes, and the chorus uses chipped iambic pentameter, accentuated with handclaps, of course, to tolerate the predictable fade-out fake. It sounds pretty fucking cool, really, even though the girls are squealing, “Love’s all we need / In the world to succeed!”

“Can I Get Get Get” pushes the same stomp and bass drum splat to move its annoying synths, cutting up the steady beat with “g-g-get” and “kn-kn-know” and every jagged guitar trick from D-D-Don’t Stop Stop the Beat (2003), but the spoony chorus is again a blistering high, the melody another dripping loinmonster. Same with the doo-wop “No No No’s” and marketably Old Skool “Happy Rap,” two songs too indebted to and ignorantly removed from their forebears to cause much of a ripple in racial or purist boundaries.

I do think that Junior Senior is a harmless manifestation of a pelvic mindset. Following one Love Liberty Disco celebration of “(Dancing starrrr!) I’m so in love with the myoooosic!” -- “We R The Handclaps” — with an introduction by Junior, “Hey, do you like music? ‘Cuz here’s a song about makin’ music, yeh,” and more handclaps, is almost too saccharine and septum-corroding to be believed. And every song is about dancing, or loving to dance, or loving music because of its danceability, or falling in love through dancing, music a young ambiguous couple’s cupid. As sincere as they pout, as endearing as their effort is, the subjects are pretty much dumb, and most of the vocals become formulaic in the kitschiest sense.

See? Now I’m dwelling on this stuff. I promised myself I wouldn’t do this. Be strong.

So, endearing Hey Hey is, and one long succulent synapse the songs become. Unfortunately, the entity of each cut is sacrificed to a greater swath of fun; sameness persists except for points of grandeur, like the keyboard and harpsichord of “Ur a Girl’s” “nur-nur, nuh-nur-neer-nur” bridge, or like “We R The Handclaps’s” scissor yeahs winding into the lower register with a deep purple bass, or in “Happy Rap” when a faux jungle rhythm accompanies Senior and his “one step forward, two steps back,” and then Junior goes, “BOOOoooo…” Otherwise, Le Tigre-boosted “Dance, Chance, Romance” and “Itch U Can’t Skratch” go faceless.

Hey Hey is sharper than D-Don’t, filled out and throbbing like soul should be, not burdened with the entropy of a smattered ramshackle collection all heart and no brains. The heart clocks out, but the soul persists.

Which is to say that Junior Senior’s new album has a better chance of seizing our collective feet than most stuff put out in the past couple months, like “Move Your Feet” finally built around solid foundations. It’s still quarantined in the moment of movement, but JS have laid down an album truer to a whole than their gimmicks might warrant. The fact that they were the last artists to record in Alabama’s famous Muscle Shoals Sound Studios makes opaque the studio magnanimity that would have previously characterized these guys, but which now pigeonholes them inside a drunken sugar high.

It’s a shame. This is all fun. It’s yummy, it tastes good, it makes me buzz in the best way, it chastises the somber and dryhumps the giddy, and I really don’t have to figure out why.