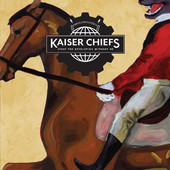 Kaiser Chiefs: Start the Revolution Without Me 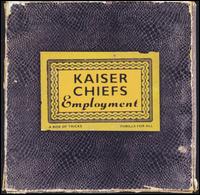 The Kaiser Chiefs’ debut single, “I Predict a Riot,” is unquestionably the catchiest song from a fledgling Brit-pop act that I’ve heard since Franz Ferdinand’s “Take Me Out,” but the girlfriend isn’t feeling it at all. She claims that “Riot” is the rare tune that loses points for actually being too catchy; ingratiating to the point where its hooks start to sound cheap and calculated as opposed to effortless.

I guess it’s somewhat of a valid gripe in the sense that not a single second of the song is used for anything other than maximum ear pleasure, and vocalist Ricky Wilson’s frequent use of “la, la, la’s” and wink-wink emphasis on long “eeee” vowel sounds will surely be off-putting to killjoy hipsters wary of the latest NME hype. But said hipsters are also the same people who James Murphy once correctly described as “afraid of fun.” Embrace “I Predict a Riot” for what it is: a future pub-rock classic which is only currently rivaled by the Futureheads’ “Carnival Kids” in its ability to cram an uncanny amount of hooks into a three-minute space.

The Kaiser Chiefs are young, British, and sell out New York City venues with alacrity, despite only just having released a proper record. These attributes have already resulted in a predictable uphill battle with the jaded indie-critic set, most of whom have already begun a pre-emptive strike against the band in the guise of much eye-rolling and lazy Franz Ferdinand comparisons-oblivious to the fact that The Kaiser Chiefs are one of the few hype bands in recent memory who don’t milk the disco hi-hat (although the cowbell makes at least two appearances).

But the early backlash should not be entirely unexpected, if only because I assure you that in this Franz/Mouse/Killers environment that currently comprises rock radio there will be a significant amount of people who will like this band. Exuberant and straight-forward enough to be digested after only a handful of listens, Employment will practically assure the Kaiser Chiefs a gig at the Bait Shop, and a SPIN cover four months from now when everybody is completely sick of them. They’re well dressed, named after a South African football team, and have at least seven potential singles on their album. Their promo team is working overtime as well; the tiny plastic bags of free schwag that interns from ass-kissy FILTER magazine hawk outside of every NYC gig have contained Kaiser Chiefs buttons and postcards for the last two months.

Not that there’s anything wrong with that, and while I imagine that explorations into depth could potentially be forthcoming on their "difficult"’ second and third albums, Employment presents the Kaiser Chiefs as an unapologetic singles band. That said, the record still contains enough tempo and mood changes to function relatively well as a full-fledged album, but the emphasis is surely on three-minute gratification. The Kaiser Chiefs force comparisons to golden-era Blur because Parklife-genius Stephen Street produced their record, and Ricky Wilson sometimes lapses into an Albarn-esque drawl while singing lyrics rife with societal critiques (all captured on the “Popscene” rip “Saturday Night”). But there’s also a refreshing emphasis on vintage keyboards reminiscent of The Specials, and the frequent use of harmony vocals and shuffling rhythms make it utterly clear that these kids have studied their parents’ Merseybeat records with a hawk’s eye for detail.

While “I Predict a Riot” is unquestionably their best song, it’s saying something that Employment has at least five others that come close. Rocket-fueled opener “Everyday I Love You Less and Less,” with it’s abundance of rhyming verses and Devo-like skittishness is an obvious choice for a future single, but “Modern Way” and “Na Na Na Na Naa” are just as exuberant and equally catchy. Even slower numbers such as “You Can Have it All” and “What Did I Ever Give You” have verses memorable enough for abundant airplay, and the former is an album highlight; a laid back shuffle with a charming piano riff and harmonized vocals reminiscent of a quality Blur ballad.

The critics who deride The Kaiser Chiefs for lacking depth are probably the same ones who blast them in their bedrooms at full volume when nobody else is looking. This is an not an album designed for navel gazing introspection, but rather one to be played at neighbor-annoying volumes before you hit the town on a Friday night. Employment loses a little steam at the halfway point, and the band would certainly be advised to ease up on their frequent shouts of “Whoaaaaa!” on album #2, but the majority of these songs are simply too well crafted not to like. A lot of other people will think so, too. You’ve been warned.