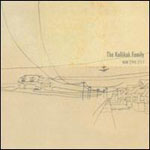 I don’t get Keith Fullerton Whitman. I mean, I suppose I get what he’s going for and how, technically, Multiples is a good record. I just don’t see it as something particularly rewarding to listen to. Which could be considered odd, I suppose; I enjoy the works of the Estonian minimalist composer Arvo Pärt, I have been known to listen to albums by Brian Eno released after 1975, and yet I just can’t get why I should really give Multiples another listen.

All of which made me a bit hesitant to tackle The Kallikak Family’s beautiful May 23rd 2007, but, as it turns out, “ambient” and “soulful” can go hand in hand. Unlike Multiples, May 23rd 2007 doesn’t rely on long blocks of repeated noise; rather, Kallikak Family keeps changing the formula incessantly, melding genres, and keeping tracks at a pleasantly ADD-friendly length.

May 23rd 2007 is the brain child of Andrew Peterson who, according to the back story on the record, also serves in the title role for the album. I fuck you not—it’s all there on the website: “Before May 23rd 2007 was a date, he was Andrew Peterson.” Indeed. Put this together with the fact that Mr. 2007/Peterson was a touring bassist for the Microphones and that Kallikak Family’s first record was more in the folk-pop grain (and dude has a beard) and the average listener starts slowly backing out of the room. It’d be a shame though, because Peterson has managed quite a feat: an intriguing, beautifully constructed experimental ambient record that, after 20 listens, I still can’t claim to begin to understand.

Perhaps what grabs me most about the record is Peterson’s unwillingness to be boxed into a genre. Indeed, ambient might not be the right category for this record at all, though there are certainly strong elements of the style. Rather, Peterson dips into field recordings, drone, electronic, and folk, melding them together in what turns out to be a remarkably fluid manner. Imagine if Phil Elvrum painted with a larger palette and you’re heading in the right direction.

Peterson starts of the record with the blaring drone of “Organ Tuning/Surgery” and lets his sound grow, loop, and crackle through the next three tracks. The beautiful title track runs on a glitch beat that self-destructs as soon as it manages to establish itself, but he follows it by building on the snippets of sound and conversation that had just barely surfaced on the previous track. It gives the impression of a more ephemeral Books, stripped of the politics and wit and left with just the sort of out-of-place strangeness that they introduced with “Motherless Bastard” off Thought for Food (though distinctly less creepy).

What really makes the record stand out, though, is when Peterson surfaces for air. Coming off the vaguely Flaming Lips “Third Phase,” the electronics are stripped away entirely for the gorgeous acoustic “Guitar 1.” It’s a beautiful piece of music standing on its own, but hearing it flowing naturally out of the previous 10 minutes of drone and glitch electronics is startling and lends it a greater depth. Peterson manages almost the same effect with “Guitar 2,” later in the record, though there he phases the last 20 seconds into the fuzzy “Miking a Drumkit.” The acoustic guitar tracks never like an escape from what came before, but instead they end up serving a clear purpose in the evolution of the record. This comes together most clearly on “October 25th,” where Peterson completely mixes the two elements, laying a glitch beats on hard over the guitar line the centers the track.

The “Portland, Oregon” series at the center of the album jumps all over the place, though it has a more vocal aspect than the rest of the record. We start with the ethereal wailing of part 1, head through the unintelligible chatter and song of part 2, skip to the beautiful wash of sound approach of part 3, and end up with the subtle drum programming and light keyboards of part 4. Again, there’s no particular explanation, but give it a dozen listens and it becomes pretty clear that it’s the right way to go about things.

There are a couple of spots where May 23rd 2007 drags. “Final Phase” isn’t quite as rewarding as it could be, though the stripped down reprise of the title track closes the album on a perfectly gloomy note. Peterson’s beat programming and drum work throughout the album has its faults, and though they could probably just be written off as part of the concept, it’d be interesting to hear someone with Dan Snaith’s drum skills take a shot at reforming a song like “Portland, Oregon Part 4.”

Generally, though, this is a record that has to be accepted as a whole, warts and all, and given a good dozen listens before an opinion can really be reached. While there are certainly elements (especially the two acoustic guitar tracks) that will jump out the first few times through, May 23rd 2007 is the sort of record that requires both enormous patience and a willingness to accept that you’re probably never going to fully get what’s going on. Imagine Panda Bear’s gorgeous and indecipherable Young Prayer reinterpreted through a filter of Four Tet and The Books. On paper it doesn’t sound that promising, but somehow it works beautifully in execution.