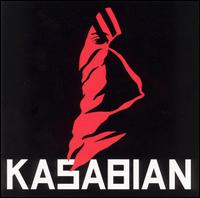 Kasabian’s eponymous debut is poised to revolutionize techno; effortlessly melding rocktronic buzzsaw guitars, stoopid Fatboy breaks and songwriting smarts, Kasabian blows open the possibilities of what mainstream techno can, should and will be. Big Beat breaks lead trip-hop verses into drum’n’bass choruses; melodies float crisply through the rubble of convention; ceaseless bodies gyrate ecstatically to songs that are just that: songs, not collections of beats. Let it be said here first: Kasabian is indisputably one of the most important albums of 1997.

Unfortunately, it’s 2005, and we’re left wondering just what the hell they're trying to pull. The powers that be are calling this album a successor to the Stone Roses and Primal Scream, but a more apt description might be “a good version of Pitchshifter” --- something for which, surely, nobody has been waiting, but here it is in all its dead-genre-baiting glory. Technically speaking, every genre’s dead by this point, but where albums like Permission to Land and Electric Sweat have songwriting smarts that wink knowingly from behind the walls of kitsch, Kasabian is busy taking itself phenomenally seriously, cramming in epic tales of betrayal and paranoia and sneering lines like, “they’re all part of the big machine now,” with an alarmingly silly intensity.

There’s pleasure to be had with Kasabian, from the shit-hot processed beats of, erm, “Processed Beats," to the plaintive synth-pop intro of “U Boat." The standout here is “Butcher Blues," wherein Kasabian gets in touch with its inner-Moon Safari with a killer walking bassline and the oddly affecting anchor line: “I just can’t stop losing control.” A haze of xylophonic chimes floats above the entire track, descending lazily until an understated guitar saunters in to echo the bassline to stunning effect. It’s effortless and catchy, a clear indication of the group’s talent.

It’s a shame, then, that this talent is used in being merely better than Quarashi. There’s little place for these sonic X-plosions in today’s musical landscape, and so a lot of intelligence and hard work went into making an album of good videogame music. “Club Foot”, for example, with its bullhorn vocals and hella-processed guitars, belongs on the title screen of the next Tekken game, and “L.S.F.” has a shoutalong Brit-pop chorus that would compliment FIFA’s pause screen nicely. A little revision of the group’s mission statement could eventually introduce an interesting new voice to modern music, but the course Kasabian’s on is headed between Headrillaz and Propellerheads on the $2 techno rack.