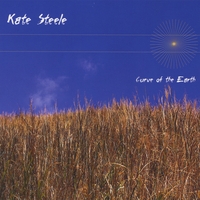 Curve of the Earth

The Rolling Stones were right: sometimes it’s the singer, not the song. Folk singer Kate Steele has a brave, proud voice, the kind you imagine ringing out over amber waves of grain as she packs her bags and heads out west. Like Hem’s Sally Ellyson, there’s a richness and clarity in Steele’s instrument that’s both undeniable and undeniably well-suited to its owner’s chosen genre. Curve of the Earth Steele’s debut album, is a set of roots music as serious as She & Him’s similarly vintage recent set is campy, twelve songs crackling into flame and billowing up into the prairie air.

Opening track “Time Out of Mind” nods to Dylan, but Steele’s lines eschew her predecessor’s abstractions for straight lines and hard declarations. She sings of modern life through timeless themes: “I can’t sleep at night, even though my doors are locked,” she admits in “The Other Side,” and highlight “Why Do We Suffer” finds her reconnecting with long-lost friends. The song looks at aging, gracefully: “Five years and we start having babies,” she sighs with the love and soft sadness of a new mother. There’s a sweet shyness to it, tempered by the grit of experience; Kate is, full disclosure, a moonlighting Cokemachineglow writer, and readers familiar with her keen attention to lyrics won’t be surprised by the attention she’s paid them here.

Curve of the Earth is a humble recording; “Why Do We Suffer” is its finest moment, an effortless blending of acoustic and electric guitars, light percussion and, of course, Steele’s voice. The arrangements are uncluttered and arguably, unambitious, but no less refreshing for it. Take the evocative possibilities of “Trouble,” a campfire of a tune, with a mere lonesome slide guitar and a bruised harmonica signaling dangers just beyond the play of the firelight.

It makes for a poignant, sparkling debut, if one that wears thin at times. While Steele’s voice is more than compelling, the melodies of songs like “Talking to Him” sometimes seem unsure, hesitant. She sings of getting older, but the young songwriter should give herself time to grow.

:: Buy this record from CDBaby