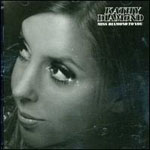 Miss Diamond to You

Here's a record that's musically all of one idea: create disco pop completely via cutting-edge house technique, meaning heftier but still precise drum programming, digitally edited bits of live instrumentation, and a careful ear for sound placement. And, in this case, lots of slap-bass.

Mu's Maurice Fulton is as able a programmer and producer to recruit for that task as any, and that's where Miss Diamond To You most obviously succeeds. The bass lines are funky and thick, often dominating the mix, while the programmed drums stipple the space that Fulton smartly uses as the third primary instrument. Deft key lines simulate disco excess in their glitzy texture while their actual melodic and harmonic workings are limited, balanced--palatable. Standout "Over" moves on a piano loop, a woodblock hit, and a synth bass that chortles over in the left speaker before key solos send the chassis spinning at opportune times between Miss Diamond's coos. The end of the track reveals a supple bass line underpinning the whole smooth mess. The song pretty fairly represents a record that sounds both more advanced and more committed to the disco aesthetic than, say, Madonna's current phase (and should Miss Diamond decide to shoot a video where she gallivants about in a legless one-piece, I probably won't feel the need to poke an eye out). It's a record that's also probably the most easily digested testament to Maurice Fulton's talent, which makes it a valuable aid to all the Fulton zealots (no, seriously, they're out there) who can't get their friends to sit through blistering, radioactive shit like Afro Finger and Gel (2003).

But if Fulton's hard stuff sends Mutsumi Kanamori into conniptions just trying to make her cries heard over the pounding, it feels like Diamond's tamer needs force Fulton to hold back. And this social function that Miss Diamond To You serves for its titular debutante is where it most obviously fails -- and in the very fact that this album is essentially nothing more than an impeccably produced announcement party. Fulton's an inspired pick for the DJ, but the uninteresting honoree of the celebration feels like a flat-note end to his serenading.

Miss Diamond herself sings soft nothings like "the butterflies are melting me" in a soft nothing voice that might as well be described as the sound of butterflies melting. She's a disco diva that conveys very little sense of fun or personality, her approach desexualized and dry. I don't buy the idea that her voice is just another instrument that Fulton's using, because Fulton bends over backwards to make sure she gets at least equal standing with his compositions, even if it's only in the spaces between where he's sweetly wanking. Plus, consider that he even makes time for her, his productions taking awkward steps back into accompanying verse forms before he continues with the jamming. In the first two-thirds of "Until the Sun Goes Down" Fulton builds incredible momentum before Miss Diamond enters and stops the polyrhythmic stomp dead in its tracks. "Racing Thru Time" is the other way around; Fulton closes the track with a steadily layered percussive breakdown that makes one wish the rest of the track hadn't bothered with the vocals -- that the instrumental had been allowed to grow in a way as dictated by the music rather than the song form.

In a way, then, the imposition of pop and disco genre -isms is both boon and curse on Fulton's showcasing; it gives him parameters within which he can flex some impressive skill sets and makes room for some of his more subtle talents, but it limits his visceral impact. Then he and his collaborator simply fail to achieve some of pop's objectives. Headphones will treat this album kindly, but the cumulative effect of the songs at a party--where an album like this should want to be played--is enervated by Miss Diamond's dullness and the uneven pacing that results. All of the actual songs are over five minutes, so there isn't much that feels like a single, and the disco-by-house pastiche that's being attempted here causes most of the tracks to fall into very similar rhythms, structures, and emotive tonalities. There's an abundance of micro-swells, but where's the album's moment to burn the house down?

But shit if there isn't some sick slap-bass on this thing. "All Woman" for President.