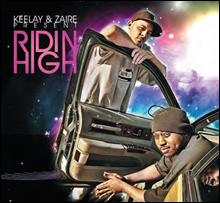 Keeley & Zaire’s Ridin High has absolutely nothing to offer its listener or hip-hop at large except for a fat pile of old rap comfort food and, tucked evenly away from the beginning and end of the record’s runtime, two absolute fucking bangers in “Addicts for Real” and “We Made It.” On the first of these, three unknown emcees do their best 2Pac impressions over a West coast sunset drive, riding bouncing bass slaps and a cavalcade of chintzy synth lines. For differentiation, we get three different formulations of the Pac myth: first the scrappy rapper, then the blissful partier, then the irrepressibly cocky shit-starter. It’s iridescent stuff, moving out, finally, on warm post-Dilla boom bap. “We Made It” expresses no countervailing opinion of what hip-hop should sound like, but no one’s the fuck complaining: warm flutes and more synthesizer waterfalls, another slow motion pop fantasia like the summer of ‘96 crystallized and made forever. Mario Dones has more muscle to flex on the mic than most of the other emcees on the tape, spitting with some Skyzoo-type serviceability but also with a Skyzoo-type capacity for striking lines: “Watch how they get mellow to it / Like we have to sample heaven to get better music.” And, yeah. That.

It’s not that these two tracks stick out from the rest, shaming them; this isn’t one of those situations. Rather, they exhibit the capacity of the record’s unambitious elements to be arranged as, well, more-than. More than “good rap tracks”—which, largely, we have here—but instead as meangingless cotton candy confections without sentiment or motivation, really, just absolute featherweight pleasure pushed softly, silkily into the listener’s ear.

But play the thing front to back, it’s nice. Keelay and Zaire are as West coast as board shorts, and roughly as up-to-date, squeegeeing every last drop of Dr. Dre nostalgia from vocodered crooning on “I’m On Swerv” and super-spare boingy percussion on the “Sole Ides Interlude.” They will milk it. They are shameless. “Alright With Me” acts like it samples “I Wanna Rock With You” by Michael Jackson but actually just rips it off—without shame, happy that it tricked you. And wait until you hear the vibes on the title track, schmaltzy as fuck, some dude with really elaborate sunglasses walking a bassline all over the small of your back. And then all of a sudden it’s like big-sunglasses-bass-player’s dripping candlewax on you, grinning and nodding like, “Yeah, this is happening,” and so confident are Keelay and Zaire in this chintziness that you barely have time to wonder, “What the fuck, how did it come to this?”

It might sound like I’m ripping on this record. I’m not. These producers are paragons of confidence—what good rap producer isn’t?— and their lush grandiosity could find an interesting counterpoint in something like the manic and burly still-hot Roc-A-Fella collective (Beanie, Freezy, Peedi). There’s a nice moment at the end of “Wake Up” where the beat drops out and Brian Francis spits an oblong, obtuse stretch of spoken word, showing the versatility of the production on display and its capacity for striking juxtaposition. But its highlights are its safest moments. This is a big, garish disc, sort of the West coast hip-hop equivalent of a Brian de Palma film. Point being, I fucking hate Brian de Palma films and really don’t care about West coast hip-hop—and yet, in the right hands, and the right arrangements, and on at least two tracks here, I forgot these things and sat, plush, sunburned and transported.