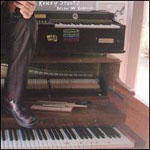 This won’t be easy. I wrote a review once about Sigur Rós wherein I, determined not to use the word “glacial” to describe the band’s sound, ended up using the word “monolithic” three times instead. Similarly, just calling an Interpol riff “angular” anymore doesn’t cut it, mostly because Interpol riffs aren’t angular at all, and “austere” is a cooler word anyway. Belle & Sebastian is “fey,” The Boy Least Likely To is “twee,” the Shins are “quirky.” Sometimes, the critical establishment falls on its ass in this manner. We’re misusing our English degrees, recycling the same few words ad infinitum.

The vicious undertow of criticspeak whispers softly to me when I listen to Kelley Stoltz’s Below the Branches, and what it says to me is “sun-drenched.” This is an album of breezy melodies, four-on-the-floor drums, plunking upright pianos, and softly squealing guitars, a psychedelic, Technicolor panorama of cartoon waves crashing on hot sand, stoned teens making out in the surf. Its easy vibe and relentless cheeriness—just look at those fucking song titles—practically beg to be described as “sun-drenched,” but, hot damn, I’m not gonna do it. That’s Blender territory, homey.

Stoltz at least fits the part, a scruffily well-kempt dude from San Fran that hand-painted each cover of his vinyl-only debut, 2001’s Antique Glow. This DIY approach pervades his newest release, too: Branches was written and performed entirely by him and recorded in his home studio. Musically, he owes an obvious debt to the Beach Boys, but there are hints of Elliott Smith’s poppy over-arrangements in the production and Ben Folds’ sly humor that edge into Stoltz’s lithe falsetto. Taken all together, the album suffers a bit from its buoyancy, and at times things feel sickly twee, but few tracks fail to make the most of their sunny bright cheery disposition.

For example: the piano thud of opener “Wave Goodbye,” after its unyielding “go get’em” lyrics and breathless, chugging build-up, finds its resolution in a simple six-note guitar line, spiraling down and checking the song’s swagger. Or, on his prayer-for-the-Rapture ditty “Ever Thought Of Coming Back,” he starts off with typically sunshiney sunkissed Wilsonic harmonies before laying into the opening line, “Jesus Christ / What you been doing all this time?” The momentum gained from this opening line carries the song through to the descending bassline that ends the hymn. Throughout, his simple arrangements belie a melodic nature that seems like a mundane sculpture photographed transcendentally. If the object remains unchanging, Stoltz finds endless variations on the theme.

I guess what I’m trying to say is that all the melodies sound sun-drenched. (Fuck!) As to why Sub Pop would release this album in February—albeit a horrifyingly pleasant February, but a winter release nonetheless—is a mystery to me. Below The Branches is an album that begs to be played on hot front porches, in Saturday afternoon dorm rooms, through open-windowed roadtrips. For now, it’s an amusing oddity; a bit wan, perhaps, but intentionally so. I’d suggest that it’s a grower, but that doesn’t seem apt, as there’s very little depth to let grow here. What it is, however, is a winner, an album that seems loathable at first but tenaciously refuses to quit grinning. Inappropriate though its timing may be, it’s a grin worth pausing Boris for.