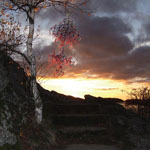 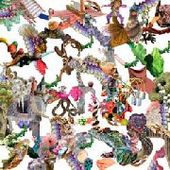 With the growing popularity of software sample-based DAWs like Ableton the kind of collage-based work Kemialliset Ystävät is known for may seem increasingly less distinct: it’s fairly easy, I mean, even with only the most rudimentary of samples, to carve out something weird and foreign sounding and build a track around it, or to scab together a bunch of random sounds into something pulsating and slick. The results aren’t always going to work, of course, but there are opportunities to easily script this kind of sound that weren’t so obvious even 5 years ago. Especially since the ease to do so is increasingly drawing the various strands of electronic and acoustic styles of sound that were adopted by past artists closer together. By which I mean—and I’m being absolutely reductive here, but I only want to make a very casual point—the difference between the Books and Black Dice aesthetically is wide, but the actual approach to what they are doing bears more similarities than not. Or to Girl Talk, or mash-up, or whatever. Collage itself, stemming all the way back to early jazz experimentation (say, Lennie Tristano in the ’50s) or the stuff Frank Zappa did with the Mothers of Invention, say, is no longer the purview of the isolated studio genius. You can get Pro Tools and record a rock album at home; you can get Ableton and, if you have an ear for it, make something that sounds like this.

No hand-wringing here. Good sound is good sound, however achieved. I bring this up only to highlight that Kemialliset Ystävät has been producing stuff like this for a long time with less ease and so, however it is made—I’m not actually sure what process Kemialliset Ystävät mastermind Jan Anderzén employs—there’s a sense of understanding and comprehension that emboldens Ullakkopalo no matter how superficially messy and spurious it may at times seem. And that gives the album a sense of comfort and beauty that may set it above other similar work; qualifying words like “space” and “restraint” and “push” and “pull” only begin to describe the intoxicating way Ullakkopalo masterfully uses inertia and momentum to play against itself. And that’s really crucial, because above all this is a quirky album, a series of teeth-out vignettes, and the relative success of the album relies almost entirely on the reality that underneath that scatter shot approach there is a clear sense of purpose that kind of breaths in and out with the music. And while I can’t escape the sense that Ullakkopalo is ultimately just somehow more slight than 2007’s impressive Kemialliset Ystävät, I also have no reservations in recommending this new album as a gorgeous addition to a strange and gappy year for experimental music.

The most obvious difference here, I guess, is that there seems to be less of an attempt by Anderzén to merge his acoustic and electronic timbres into a unified whole. If previous Kemialliset Ystävät albums have been…well, not dire, but at least embraced gloom and scarcity, Ullakkopalo might as well be his sunshine pop album. “Kivikasan Rauhassa,” for example, sounds a bit like a cyborg discovering the world for the first time, happy and confused, thought melodies trailing off into little curlicues of indecision. And maybe that’s the primary theme here: it’s quriky and happy, but there’s little finish. It’s like the whole album is an extended denouement. Consider “Maksaruhoja”: so many of the attempts to build off the backing guitar riff are scuttled into a repetitive seething of stuttered noises. “Muutujat / Saattajat” takes “shimmery” to mean “blocky”; vibrating squares and rectangles of noise across a stereo field in a way that recalls the plunderous backing instrumentation of old Tim Buckley albums. Even closer “Lyön Häntäni Vetoa, Täällä Oli Äsken Joku” takes the long way around building to the album’s conclusion, literally elliptically. “Surullinen Kohta Seinässä” meanders as well: buzzing voices and woodwinds attempt to pry open blurbling synth lines. By the time “Älä Koske Lintuja” actually features an electric guitar for about five seconds that itself seems foreign.

“Meanders” isn’t necessarily a bad thing, either. Fonal has always championed introspective music, and Ullakkopalo ceratainly provides lots to grab onto. There is grit here; it’s not jokes and funny noises. It is surprising, however, just how fun a track like “Mestari Ei Väsy” is, given what band we’re talking about. And while I wish there was maybe a little more heft at times, it’s hard to argue with just how well Anderzén has managed to redeploy his formula to capture such a new range of emotional and aesthetic ideas. Maybe that’s the joke of the album: in playing happy, Anderzén has actually managed to make his music sound even more misanthropic and foreign than before.