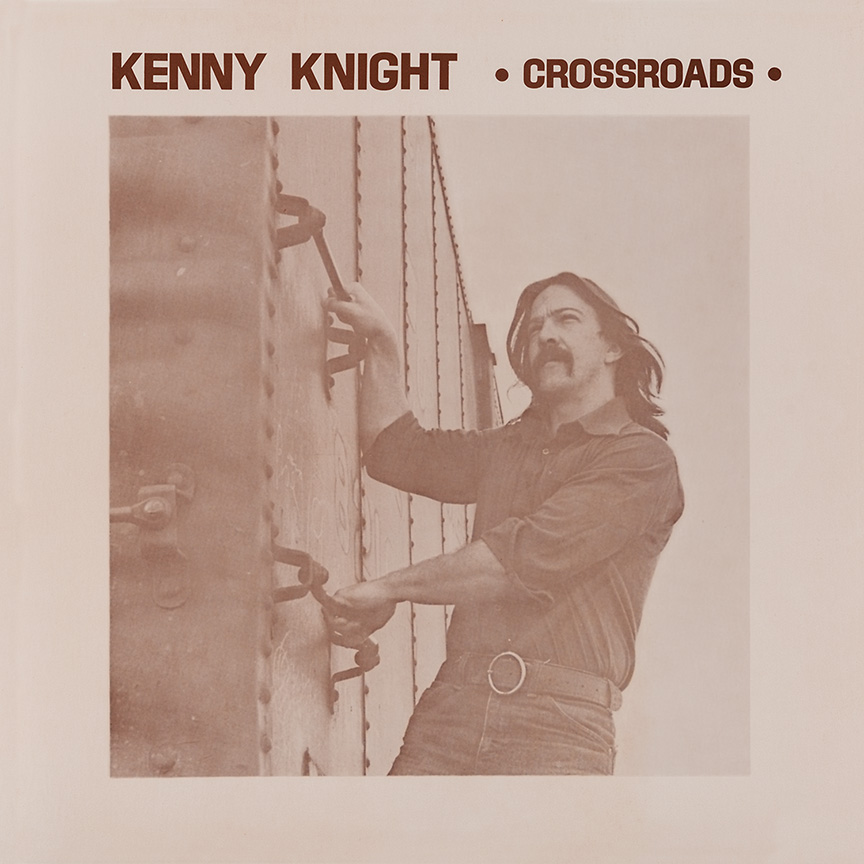 Kenny Knight’s Crossroads, originally released in 1980 and reissued this month by Paradise of Bachelors, is a must-listen for two reasons. The first and most instantly compelling is its air of promise and possibility. The story is almost too perfect to be believed: writer Michael Klausman stumbles across an album in a Denver shop. Struck by the cover image—a mustachioed man climbing the side of a train, eyes squinting into middle distance—he takes it home. He listens to it and it is, astonishingly, good. Further research on its provenance provides no results; all he knows is that it’s by a man named Kenny Knight and was released in 1980 on a small label called Calop records. He eventually tracks down Knight, a former Marine and auto-body painter who released just the one record and, discouraged by its lack of success, tossed the unsold copies into a dumpster. But this one made it into the right hands—and that is how it got into ours.

This is what I mean by possibility. It’s every record collector’s dream, or at least it was, before eBay and Amazon and torrents made it nearly impossible to really discover something, something that hadn’t already been claimed and stamped with a genre and evaluated in stars by Allmusic. There are still plenty of overlooked records out there, probably more than ever due to the ease of recording and releasing online. Reaching listeners isn’t the problem anymore, it’s distinguishing oneself in the avalanche of releases. But in Kenny Knight’s day, you pressed a small number of records and tried to promote them as much as you could locally and on tour. That was it. In the mind of the record collector, Kenny Knight spells hope: there could still be so much we haven’t discovered, humble homemade recordings as cultural documents, lost postcards from another time and place. The story of Kenny Knight, and the stories of so many others discovered through the work of labels like Numero Group, is thrilling, really. It’s the kind of thing that, to a music lover, feels almost spiritual.

This would all be much less compelling, of course, if it weren’t for reason number two to listen to Kenny Knight’s Crossroads: the songs. Crossroads is a gentle, melancholy country-rock record in the vein of the Grateful Dead, Buffalo Springfield, or Gram Parsons. For a first album, it is remarkably coherent in theme and sound. The songs, straightforward ruminations on love and struggle, are a nice mix of somber, upbeat, and edgy, but all are grounded in swooning pedal steel and honky-tonk-tinged guitar. Crossroads sounds alternately like a classic from the early ’70s Laurel Canyon scene and like a contemporary record (think the Men’s recent work, minus the noise). One thing it doesn’t sound like is a record from 1980—which is perhaps why it never originally found its audience.

All the better for us. Crossroads is wall-to-wall beauty, particularly the affecting “One Down” and “All My Memories,” and closer “America” (“America, with all of your beauty / America, looking so pretty / Don’t lock me out / Don’t push me about / Open up your doors for me”). The messages here are familiar, but delivered in Knight’s plainspoken voice over liquid guitar, it all sounds fresh and true—as true today as it must have in 1980. Another highlight, “Carry Me Down,” actually takes on new meaning in light of the record’s reissue, as Knight sings of hope in the face of difficult odds: “I’ve been messed up, dressed up / and seen the world / I’ve been making sounds, getting down / No one hears a word / It won’t be long / I’m holding on.”

As you may have guessed, the conclusion of Michael Klausman’s story is that he did, in fact, meet Kenny Knight, still alive and well in Denver, CO and willing to pen some liner notes for the Crossroads reissue. He talks of his beginnings—writing and recording music from age eleven—his years playing in bands and stationed in California with the Marines, and eventually shopping his debut along the unforgiving Sunset strip in 1980. But he also talks about the times since—writing and recording for the simple reason that “I love to play.” And it’s this love of music that shines through on Crossroads, from the heart of man who had already done a lot of living, but never lost his creative passion. I suppose that’s what is so appealing about the rediscovery of a “lost” recording: the idea that art is and should be a product of life, an accompaniment to living. It doesn’t have to be a raison d’etre, the thing that gets you where you want to go. It can instead be the thing that you take with you always, that enhances where you go and who you become.

These are the kinds of timeless sentiments invoked by Kenny Knight’s Crossroads, both in its story and its songs. This record is still unlikely to reach a huge audience, but it will reach those of us who are looking for something different—for that thrill of possibility and discovery. And for us, it’s a treasure.