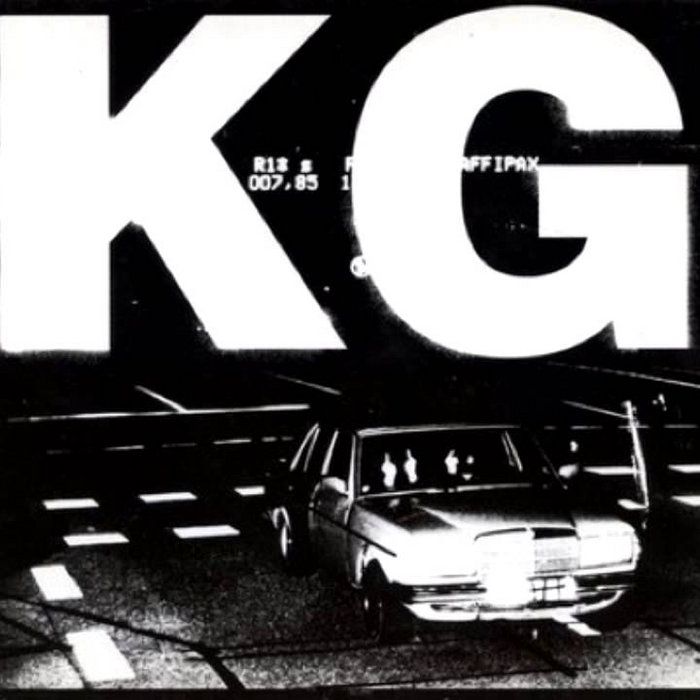 On the back of the case of Adieu A L’Electronique are blocks of the same track list over and over: “S.P.E.C.T.R.E.” 1-10. (For the sake of expediency I’ll refer to each track based on its number.) “Spectre” means ghost, so what we then have is a repetition of ten different permutations of (and by this point I’m reading far too deep into things, but I’m a runaway train) ghosts of electronica being refigured to something different. It isn’t IDM—half of it belongs, after clever remixing, in a club, and a number of the “spectres” here are already club-ready. But what separates the wheat that is Adieu from the chaff that is the greater part of electronica is KG’s hysterically bombastic ambition. If these tracks were remixed in a club, it would be a complete mindfuckingly, mindbendingly, and probably drugged phantasmagoria of a set.

Just as those of us in Nietzsche’s world understand that new creation will be wrought through destruction (more metaphorical than physical, you fucking nihilists), so there is a simultaneous creation/destruction element to KG. It’s immediately present in the opening few seconds before “One,” where trumpet choruses that could be used at either a death or coronation, or both at once, wail almost absurdly over cut up pieces of audio history. It’s more than a random collage; it’s chaos made up of significant, controlled moments.

KG’s chaos/order dualism enacts itself in much the same way. But never once do KG lose control. They just tear off pieces from the old wall of electronica, and at times, IDM, and then reassemble the eviscerated ghost into a distinct project of startling originality. What I’m saying is: you’ll be able to recognize the shards that KG have thrown brilliantly through their sound sculptures, but the whole is something positively new.

“01” moves through almost six movements in its first two minutes, each of which is marked off by a sound that approximates something between the breaking of glass and obliterating a cymbal. Each of these specific movements is clustered into larger movements, and is made up of what seem typical bleeps and synth stutters; the organization of them is not completely traditional, but it’s nothing groundbreaking. But suddenly, at almost the fourth minute, neon noise envelops the entire track, bringing a discordantly beautiful haze over the synths and percussion from earlier movements as they wind themselves back into the mix. In the refracted, glittering, eerie light of the glorious descending smoke, each of those elements takes on extraordinarily different weight; colors change, the air thickens, and the anti-electronica revelation thunderclaps its way through the entire track, as an angel howl of feedback pierces through its final seconds.

The moment of catharsis seems to come out of nowhere, and from then on you know not to expect anything from KG; they will annihilate it and give you a new piece of art made out of the fragments of those anticipations. In “02,” it’s done via explosions of white noise – the first recedes into pure-toned synth glitter dust, the second into barely reined in industrial percussion, the third into orchestral synths, and in the final heave, a swirling mix of harsh wind-drop IDM, and all of the above.

KG’s moments of ineffably beautiful harmony is accentuated by their employ of discord, so that when those cathartic finales and explosions do come, it’s a release of sonic tension that’s been built up over the course of entire songs. What’s so striking is that these elements recur, and yet take on different textures within their own particular environments – this is what I meant when I hinted at permutations of the same ghosts.

A couple of these experiments are less successful than others—“03” never achieves the same visceral effect of its earlier siblings, its rough-edged grit in each separate movement never cleans itself up, the movements never coalesce to really rebuild the broken pieces, and the overall effect is an abortive one. But never fear; the immensity of tracks like “04” with its blistering, conquering, speaker-busting sampled guitar over rising and cascading synths, complex smaller interactions, and heaving percussion more than makes up for KG’s less affecting moments. And KG achieves such astounding impact with different elements each time, whether it’s sludgy, creative percussion or sampled choirs, or simple discord/harmony dynamic. All of it is meticulously thought-out, and unapologetically raw, for better or (rarely) for worse.

So just do what I did. Crank the volume, put your face no more than a foot away from the speakers, and feel the thronging pulse of these (both) elegiac and eulogistic tracks, the bleeding, triumphant, tattered life of the ghosts of IDM and electronica subsumed into an unnerving, beautiful whole – feel it bat against your eyelids and stir you. And then thank Christine De Lazarro, Dawn Trowell, and Janice Bahavnani, for being such good conjurers. Because they may be saying goodbye to electronica, but you’ll be saying hello to a whole new world of something else. Believe, me, it’s not even worth trying to define it.