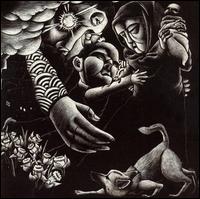 The West is the Future

Kid Dakota’s 2002 release So Pretty featured some genuinely impressive songwriting; “Crossin’ Fingers” was a gut-wrenchingly romantic stop-start ballad about betrayal graced by Darren Jackson’s tortured, wavering voice. Songs like “Smokestack” and “Overcoat” bore a marked semblance to Low (who happen to run their label, Chairkicker’s Union), even including contributions from Low bassist Zak Sully. The record was a delicious set of murderously languid ballads that were surprisingly addictive. His hushed voice and wandering guitar seemed a perfect illustration of a bleak South Dakota lifestyle that led to battles with drugs, unstable relationships and a sort of general suffocating feeling. Darren Jackson, the man behind Kid Dakota, could wrap these unsavory elements into an intriguing mix that, while achingly sad, still managed to be a beautiful and affecting portrait of his Mid-Western home.

So, in short, I was very much looking forward to anything new from Kid Dakota. Jackson’s second proper album under the Kid Dakota moniker, The West is the Future, is, unfortunately, a step back. With cover art that references 1930s era Diego Rivera-style murals glorifying the working class and an introduction to his bio at kiddakota.com that begins, “It’s quiet on the prairies, a lone tumbleweed scratches its way across two lanes of empty highway,” it’s pretty clear that Mr. Dakota is taking on some heavy legacies as reference points. It’s an interesting way to frame the album and suits the earnest, romantic songs Jackson has collected here.

As “Pilgrim” opens, it’s immediately obvious that Jackson had a much higher production budget this time out. His ballads, once claustrophobic and spare, are given a fuller treatment by guest stars Low (Zak plays bass, Mimi and Alan make appearances) and Andrew Broder (Fog). The result is something that’s still quite spare and melodic, but more full and almost cinematic in it’s thick feel. The difference between Jackson and Low is Jackson’s penchant to write songs that are downcast and depressed while somehow managing to sound triumphant; he adds epic bombast to these ballads and dirges that slowly build to full-on rock explosions.

All this would make for a highly entertaining album if it weren’t for the nagging aspect of Jackson’s newfound vice: asinine lyrics. Too often, Jackson drifts into trite narrative exposition or dwells obsessively on the notion of the once-promised-land of the West being some sort of hypocrisy. His wonderful, vaguely falsetto voice is wasted on earnest lines like, “The windmill is spinning to no avail / Cuz in this here county, the rain is more precious than gold… / But nature’s indifferent / it’s beyond God’s control, tumble, tumble.” “Pine Ridge” features a nice guitar riff, but its lyrics are greatly distracting: “She’s fourteen expecting, he’s forty neglecting / They’re not married, they’re blood-related / Pow. Pow wow.” Elsewhere Jackson informs us that he hasn’t returned home to Minnesota for ice-fishing or duck-hunting. The song, that is obviously intensely personal, becomes a sad farce. Ice-fishing? Duck-hunting? Way to break the mood, man.

To be fair, the album is not without bright spots, either. Buried in the latter half of the album (where less brave listeners might miss it), "Winterkill" rivals anything on So Pretty; its lyrics are less narrative and sad-sack-story obsessed. Its music peaks in a beautiful guitar explosion, a coda that gives the listener hope that Jackson can return to his earlier heights and start writing songs that express his existential dread and myriad issues rather than recount them through stereotypical portraits. In the meantime, I’ll put on So Pretty once more and think of happier times... and try to stop thinking about duck-hunting. Come on, Darren. Duck-hunting?