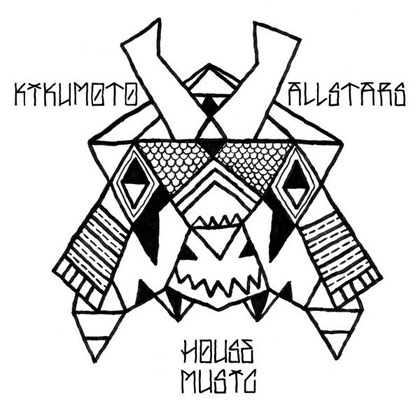 Right now is an odd time for dance music nostalgia. It seems like pretty much every popular and crossover dance act is judged on its authenticity, or at least it’s own sense of being in on a joke bigger than it. This over-dedication to such an abstract and indefinable notion has resulted in an unfortunate slew of DOA singles so dedicated to co-opting a piece of credibility from the past that they sound more burdened by fake constrictions than liberated by the kind of futuristic spirit that possessed their influences.

Kikumoto Allstars, then, is an act with a history and mission statement that suggest rigid adherence to such nostalgic authenticity: Named after an engineer at Roland who contributed to some of the legendary x0x series of drum machines and bass synthesizers, this debut record is proudly promoted as having been crafted using only vintage analog gear. Not to mention the track titles—“I’ll Make You Jack,” “Jack The House,” “Warehouse Days,” “Can’t Stop The House,” “House Music”—all paint a pretty clear picture. This is as close as we’re going to get to having a DeLorean set for Chicago, 1986.

So how does Cam Farrar, the producer behind the Kikumoto moniker, get away with it? How does a record with this much stale potential sound so infectious? Farrar’s focus on the groove, turns out, is his saving grace. The tracks here never sound self-consciously hip; there’s no unnecessary over-compression or faux-Jarre keyboards thrown out in desperation. Just repetitive acid bass grooves with some filter tweaks over a bed of tinny synthetic percussion and the occasional deep male or airy female voice demanding the audience to jack it, feel it, work it, groove it, uh huh, turn it up, up some more. With House Music, Kikumoto isn’t going for a modern update with tinges of the classics (a la Hercules & Love Affair and its misfire LP from last year); Farrar is just happy to show up with something that sounds like what he loved growing up. No breakthrough, no frills, no signs that this had to have been made in 2009 instead of the mid-80s (other than a lack of tape hiss). Farrar even includes the kind of corny lifestyle winks prevalent in early house cuts—see: the sly repetition of “E” at the close of the spelling of “House” in “Can’t Stop The House.”

It’s difficult to say what makes a good acid groove, but it’s generally a hit-or-miss kind of thing, and here Farrar is a master of this indefinable essence, getting away with six minutes of the same squelchy TB-303 bass line (sans any lead synth) on “Jack The House,” where the excitement comes from filter sweeps and crescendos, plus the command to “jack it all night long.” Farrar further bleeds into the more overwhelming trenches of early rave on “Shed 13” and “DCO,” the latter of which features sounds that wouldn’t be out of place on 808 State’s outtakes collection, Prebuild (2004). As I found myself noting when listening to the glorious chord progressions on “Just A Feelin’” running away with the theme from Inner City’s “Good Life,” this guy somehow gets it.

Every once in a while when an old-school person resurfaces (as recent releases from Kenny Larkin, Kevin Saunderson, and DJ Pierre demonstrate), Farrar taps into a deeper vat of soul, the kind of inescapable melancholy that accompanies any great night out at a club. Moments of flashing-lights euphoria are concluded by the harsh light of day, exhaustion, and the feelings of excess from consumption. “Warehouse Days” perfectly expresses this, a soft female narration describing this leaving a club in its halcyon days and how something’s not quite right. “Sagittarius,” meanwhile, fits the mood for the drive home and its accompanying eerily blessed-out calm.

Generally, nostalgia of the Kikumoto Allstars breed results in, at best, an album of watered-down coulda-been-great tracks. Perhaps the secret to Kikumoto Allstars is that Farrar doesn’t try to push things forward at all, instead being content to make an album with the sound of early house music using the same tools, only two decades later, and then calling it House Music. This material has the same timeless qualities, the same juxtaposition of crazy partying and intense longing, as you could find in any Frankie Knuckles or Marhsall Jefferson or Larry Heard. I suppose that makes this a pretty “authentic” record, but the beauty of these pristine productions is that, once they’re playing, like the aforementioned masters, it doesn’t seem to matter when all the fuss came about.