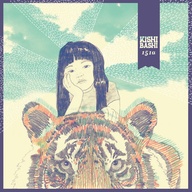 About two months ago, there was an intensely competent (vanilla) New Yorker piece published about the (vanilla) group the Shins, penned by one of the most even-keeled (vanilla) music writers I’ve ever read. (I won’t link to it for obvious reasons, but it’s not a hard batch of paragraphs to scrounge up.) To paraphrase, the review said the Shins’ significance rests in their having made “unapologetically pretty” (vanilla) music, thus bravely paving the way for “indie music” to likewise be pretty (vanilla). While I found the article itself about as palatable as the fifty-cent (and I am sincerely asking: was that supposed to be vanilla?) soft-serve at the gas station across the street from my office—it is half a buck for a reason: no expiration dates—I also just do not believe any of that Shins business to be the case.

Because, had that been the case, Kishi Bashi’s string-centric aesthetic would be tied less to the likes of Owen Pallett and Andrew Bird, and more represented as a straight line between this album and the Shins of yore. (If you are thinking “vanilla” is not an apt term…I mean, track “Bright Whites” now graces the Martha Stewart Living: Cooking, Crafting, and Cleaning April Playlist. I do not “vanilla” in haste, readers.)

With choral vocals more effervescent than seapunk bubblescapes, Kishi Bashi’s 151a sounds like the equivalent of tilting your head one way, then the other, and then having a kind someone-slash-molecular-gastronomist blast a phenomenal amount of neoclassical, vanilla-infused foam into your ears. And it’s an effusively amiable burst in stark contrast to its wind-breaking bed(shitting?)fellow, of Montreal. While often functioning as Kevin Barnes’ right-hand man, K Ishibashi, songwriter, producer, and multi-instrumentalist, here self-releases and self-produces his solo work as a distressingly tender, bright, and celebratory document of the airy upper reaches of vocals and violin pairings. Which is the last thing I expected after the deservedly wincing, and just as deservedly fart%-incurring, suckitude of the recent of Montreal release. While the backing vocals bear glimmers of the of Montreal aesthetic and the occasional song invokes similarly Barnesian electro-pop, 151a is the aforementioned “unapologetically pretty” brought to a level of fine-tuned, orchestrated zealousness for fine-tuned, orchestrated zealousness’s sake.

Operating live very similarly to Owen Pallet—with a loop pedal both harnessing and layering vocals and violins—Ishibashi seems to have recorded his album in the same way, taking brave delicacies and blowing them up to near-operatic glory. Textured with fantastical swipes of harp and staccato plucks of violin softened in the background, each instrument steps back from the spotlight and instead, warmly prickling like raised hairs, subsumes behind storybook soundscapes. Maybe Ishibashi’s music doesn’t quite carry Pallett’s heft or import, but the storytelling, fable-like personality of the album does.

151a is, in fact, highly narrative, so illustrative and well-composed it occasionally verges on something animated and directed, smacking of Disney musicals (a good place to mention: the whiffs of Lion King carried by the chorus work could be turned down a notch). While the flawless production plays without kinks, K Ishibashi doles out simplicity and, well, not imperfection so much as less perfection—where it counts. Namely in his vocals. Open to more of the vulnerabilities that come with a candid, less-massaged vocal track, he sings, “I haven’t been so in love in a long time,” over crescendos with a cautious (and not inhuman) touch.

Similar to of Montreal, a question begins to raise itself about the sincerity of the songs. Do you care? “Wonder Woman Wonder Me,” for instance, swoons to a hyperbolic doo-wop sway like some Saturday morning cartoon short of a bow-tied daisy crooning into an old radio mic. Curiously (or not) less present in the most of Montreal-sounding track on the album, “It all Began With a Burst,” which issues a wispy and weightless apparition of the band’s electro-pop former glory, is that question of sincerity. With vocals unnervingly similar to Kevin Barnes, Ishibashi sounds himself like a ghost of the guy who sang “Tim, Wish You Were Born a Girl.”

In the loose-tongued lyrical-ness of Animal Collective, he details new days, new loves, finger-sucking in the desert (m’kay), and thoughts like “everyone loves reading a novel.” So, I like this guy’s attitude, especially about the latter, but where it’s optimistic it’s also questionable, and where it’s grim in content it’s unseasonably temperate and cradled in whistles, handclaps, and other stuff that would probably be home on some super-depressed Menomena song. The amount of stuff that soars, the infinitely-prettier-than-actual-Manchester track “Manchester,” and the gleaming, languorous melody of “Bright White”s clapping/stomping pace, reminiscent of Blitzen Trapper’s “Furr,” it all belies diseases, endings, and short days. Seriously, these tracks are like…hotel-towel nice.

“Every story has its proper end”? Well, that can’t possibly be true. But given this album’s conception as a Kickstarter project’s wet-dream-come-true, the world Kishi Bashi paints with that lily-petal-light brush revolves around that rich sentiment, that all things find their destined conclusion, held up as a truth and source of gravity. Fair enough; even to its benefit, the remarkably colorful album that’s spun around that fiction is as palatable as it is resolved. And enjoying it solely depends on your ability to stomach something so fantastically…well, you know.