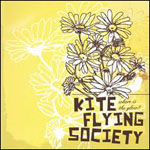 Where is the Glow?

Kites are fickle things, only as constant as the wind. They can soar high and strong only to crash downward moments later. Luckily, San Diego’s Kite Flying Society has learned to weather the sudden changes and crafted a consistent, if unadventurous, debut album. The acoustic indie-pop band takes a humble approach: the songs consist of little more than vox + guitars + percussion, peppering in organs and Moogs. But the band does a lot with a little, threading in backing vocals here and there and making ample use of handclaps and shakers. Sometimes the extra instruments -- especially the Moog -- feel intrusive, but mostly this is comfortable bedroom pop.

Like so many indie-pop records, Where Is The Glow? (answer: right here) is a lo-fi one, but unfortunately the on-the-cheap microphones mute the vocals and leave them sounding too flat. The band makes it work on the sparse “Groundflower,” evoking Rogue Wave’s quieter songs with its shaker egg and singer Dustin Illingworth’s strikingly similar timbre (coincidentally, the band’s first show was opening for Rogue Wave). Once one gets used to the recording style, more of the songs start jumping out. “If I Could Split” is a surprisingly precise ballad, deftly incorporating a glockenspiel’s dulcet tones.

“This Shadow” starts with an alt-country feel that gets thrown off when a hot Moog sears through the bridge. The Moog sticks out again on “Tiger Stripes,” though a song with the line “imagine a soul with tiger stripes” is already well beyond most people’s cute tolerance. It’s not the only juxtaposition: Illingworth has a gruff, mature voice, the sort that carries country-tinged acoustic material well, yet he chooses to place himself in a bed of neon pink pillow-pop. Sometimes, as on “If I Could Split,” it works memorably, but often it simply confuses. Does “6000 Shipwrecks” want to be an Uncle Tupelo song with its heavy open chords or does it want to be a psychedelic romp through handclaps and “ooh la la la’s?” The band wants it both ways, but merely jumbling styles together doesn’t compensate for too-simple songwriting.

Closer “When These Clouds Collide” is as insubstantial as it sounds, an appropriate end to an album with about as much weight as cotton candy. The band’s got an interesting bag of tricks, but without a more unified approach, the album tugs this way and that like a kite tumbling around the sky. The band would do well to hold the strings tighter next time, but until then, the Society seems to be avoiding too many crash landings.