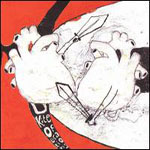 Heart Attacks, Back to Back

With all of the emphasis on subtle manipulation in drone music lately I thought feedback had gone the way of the guitar solo: Corganostracized, relegated to “Chinese Democracy” (it doesn’t rate italicization until we have proof it’s getting published) anti-hoopla, received by the indie-masses like seriously pondered-yet-excruciatingly executed high school poetry. Heart Attacks, Back to Back. isn’t a zeitgeist for feedback, no, but feedback is the lifeblood and accoutrements of Kite Operation’s musical corporeality. They indulge in it: shimmying, animal-noisying, lodged-in-the-right/left-channel-like-a-ghostying all over the place. The band’s guitarists, Joseph Kim and David Wang, do operate it in the confines of their compositional palette while at times they probably get a little too wonky/geeky/pasty/reliant on it. Even when you’re kind of nodding your head bemusedly at the speakers thinking “we get it,” you’re still kind of egging them on.

Because this album remembers the nineties in a gut clench, throat gob, the-only-actually-good-band-in-high-school kind of way. The oughts have been all about mining or stripping down the artsier tendencies of bands that TOGBTWTYHS managed to sound like (often unintentionally, since they probably aspired to sound like Nirvana or early Radiohead)—bands like Shudder to Think and Shellac and Sebadoh and the Spinanes and Superchunk and Slint and Sonic Youth and probably some other bands that don’t start with “S.” We’ve stripped them down to make way for revived interest in new wave and Strokisms or we’ve augmented those tendencies with horns and strings and haberdashery and pizzazz to become Architecture in Helsinki-like. The feedback and pulsing compositions of Kite Operations unwind the entire mess to sound more like.uh.Unwound.

And maybe that recollection of “U” and “S” bands from the US is why Heart Attacks, Back to Back. is so comforting; as “Comfort” proves, a quiet, deliberate chorus following a post-rock canopy of soaring guitar work is just as warm as its plinky intro. “Killing/Afternoon” is a post-rock nightmare, literally static and resonant clean guitar notes at outset, slowly building tone through the occasional crunch guitar chord and airy noise. Sung Shin’s drumming, outrageous throughout the album, is here especially interesting; he has to wait for moments where he can actually play and when he does it sounds like he’s going to rip the canvas open. Yang and Kim do this funny little doo-wop thing; one of them is fluttering in the background, the other attacking your left ear drum directly, and then the Smashing Pumpkins guitar noise explodes.

Jie Whoon Kang’s bass is critical for a lot of these noise excursions; while his own playing is generally restrained (he’s classically-trained, so it’s more about tone and technique than it is rawk) it anchors the more dissonant, pedal-driven excursions of the guitarists. Check “Chimera,” where the guitars are so heavily phased and delayed (I think that’s the combination, but anyway the low end is cut) that they simply spray across the top of the outro. Or “The Last Flight Out Left with No Warning”; Kang’s funky bass riff is the only (reasonably) consistent item in a morphing web of different tones.

Kite Operations gets the grit of the nineties: the thick, dark guitar work and only occasional hook keep you grounded in the sense of a song’s tonality. It’s not about what a song should be; it’s about turning an idea into a song. And in that sense I can actually hear all of those “S” bands in the interior of this music (especially Slint and Shudder to Think) even if this band doesn’t take the same route to get there. Maybe they’re just finally catching the last resonance of nineties feedback and this is what it sounds like today.