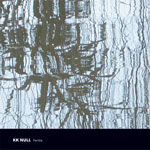 Either Kazuyuki Kishino’s heart rate is always over 100 or his hometown of Tokyo just moves too fast. Or maybe his once-work with Steve Albini (who produced five of Kishino’s Zeni Geva albums) has left him keenly interested in the source of distortion; Zeni Geva’s hardcore never stopped to deliberate, but Kishino’s work as KK Null is all about building harshness out of contrast. You know: the fertile places. The press release calls it “cosmic noise maximal/minimalism.” I call it “turn your speakers down so you can adjust appropriately, or don’t, but don’t blame me when ears bleed because of those high pitched soundwaves.” Okay, fine.my headphones were probably on a little loud. Whatever: this music is gorgeously painful.

There’s a point about midway through “0357” where Kishino filters some percussive samples to the point where it sounds like a beat constructed from popping bubbles of reverb. Places like this are the happiest in Fertile‘s arc; we get some bouncy noise drawn into mimic of conventional arrangements. But most of the disc seems to take air and busy it up, launching into the very currents and eddies that provide the foundation for gain on a signal in the first place. It’s not quite Iancu Dumistrecu—Kishino isn’t trying to create the most distortion—but it is very much a game of molding different patterns into various grueling ambient collages (check the scariness of “0418”). Like Kevin Drumm or KTL (both of which he predates, so I’m misleading a little) he’s building songs by letting himself be guided by the tone created by modifying his source material’s signal.

There’s probably a better way to explain this. Much of the source material is culled from field recordings Kishino made in Kakadu Park near Darwin, Australia. Since the album sounds like a city, I think you can take literally the idea that, amplified enough, any environment sounds chaotic. This is the worm’s perspective, or the ant’s; we don’t need complicated mathematics and chaos theory to tell us that “0359” sounds foreboding in the worst way despite the fact that comfortable getaway back-to-the-landisms simply leak off the piece. I think that’s intentional. The point isn’t to weld flora and fauna to industrial music; the point is that every dandelion seed has its own Horse Rotorvator (1986) to push it along. If you listen hard enough, that is.

We can’t listen that hard, of course, so Kishino amps everything for us: flocks of birds, a burning fire, insects and bog dwellers jamming at sunset. With a glaze of distortion on everything he’s creating a busy sub-human world that sounds just as industrial as ours. “0957” echoes back upon itself like the interior of a cave, or a submarine; the point isn’t that’s it’s either/or, but that Kishino has melded an environment that is enclosed, that we are inside of. You can hear the ocean in a shell, right? Kishino is just taking that idea and giving it warmth, amping the signals until the interior of the song undulates like a swallowing throat. Each song is a different kind of experiment in location: “1343” is a point right outside your window; you aren’t inside it because you can feel it approach you. Collapsing trash can samples explode against insect legs and fizzy static. “0415” is like a jellyfish blob coagulating in front of you. Its surface ripples and pools but when you touch it you get burnt. Like I said, “gorgeously painful.”