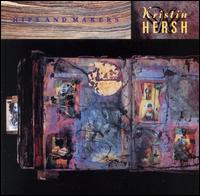 It would take until 1994 for Kristin Hersh to release her first solo record, though she certainly wasn't a new talent at the time. She had, after all, already spent over a decade fronting (or co-fronting, depending on how big you want to play up Tanya Donelly's role in the group, pre-Red Heaven) one of the '80s premier indie-rock bands, Throwing Muses. But shortly after the release of the first post-Donelly Muses record Red Heaven (Hersh would go on to write the entirety of the excellent University and Limbo records; Donelly would once again rejoin for 2003's eponymous reunion record but would leave at the time to form Belly, who would make one excellent album, Star, and a mediocre last hurrah, King), Hersh would finally bring her incredibly aberrant vocal mannerisms and songwriting to a project that would be completely her own.

Hips & Makers would take form as Hersh's most personal album by some distance. Mostly comprised of songs she'd written over the years in the Muses, specifically chosen because of their highly personal and intimate nature, Hersh rarely sounded as sincere or inspired. But it's not only the acerbic themes (persued to a level that far surpassed any of her material before it) that are pared back to a purposely raw base; compared to her usual fierce and upbeat Throwing Muses material, H&M's desolate arrangements -- for the most consisting of only an acoustic guitar, cello, and some occassional piano -- are also surprising and are key to most of these tracks working as remarkably as they do.

It opens with one of the finest she's penned and one of Michael Stipe's most well-placed cameos, "Your Ghost," instantly setting the record's tone of sharp, introspective imagery that is almost dripping in loneliness and despondency: "If I walk down this hallway tonight/ It's too quiet/ So I pad through the dark and call you on the phone/ Push your old numbers and let your house ring/ 'Til I wake your ghost." Stipe's backing vocals are equally stark and ethereal, especially in his higher harmonizing that come during the final choruses, complimenting not only Hersh's lyrical pleas but also the already overpowering melody -- the culmination of which is nothing short of breathtaking.

The track approaches, like many of the record's other major accomplishments, the intertwined subjects of death, love, loss, naivety and longing. Another of her best, "Me and My Charms" is beautifully fueled by her denial-is-all-I-have-left lyrics: "You can come back/ I haven't left you yet. . . You can't leave me now/ I haven't left you yet." It's unclear -- if only because Hersh seems like the type to trick into thinking it's something it isn't -- throughout most of the songs whether she's breaching the subject of death with an unfettered literal meaning or just using it to make her ruminations on failed relationships all the more poignant and sharp. Either way, the songs hold a devastatingly personal edge that never falls into the cliched sentiment that many of her contemporaries partake in rather than bothering to find a new (or even slightly new) angle.

Although H&M takes on such a sparse feel with a lyrical tendency for defeated, sometimes even downright morose, storytelling, Hersh certainly doesn't completely slip into any kind of mellowed out soft-rock/singer-songwriter convention. Several songs, like the beautiful piano ballad "Beestung" ("You fit me into my place/ You're beestung here") or the confessional "Teeth" ("Never was a baritone/ 'Til you stepped in/ Never dried my halters on the line.../ All girls cry/ Like I said, I don't know why") are kept to overtly simple and repetitive progressions, and though they add an essential immediacy, they in no way make up the entirety of what H&M has to offer.

"The Letter" (which has always brought to mind Leonard Cohen's "Famous Blue Raincoat"), for instance, winds its incredibly cathartic lyrics -- a dated letter that ends with a startling "I'm crawling on the floor/ Rolling on the ground/ I'm going to cry/ love Kristin" -- around the same repeated two chords and very light piano garnishes, relying instead on the momentum built from the kind of vocal intensity that very few contemporary songwriters can rival; witness, for example, her delivery of "You comfort me/ You make me die/ I'm gonna cry/ I won't go home/ Don't kill the god of sadness/ Just don't let her get you down" mid-way through the song.

"Close Your Eyes" is another of the album's most surprising moments, far closer to her Throwing Muses records that would follow H&M than most anything else here, letting Hersh's voice truly soar over what is perhaps the most upbeat (in a relative sense) number of the lot. "You think that they don't shatter you/ You think that 'til you go," Hersh exclaims with the fervor of someone that had just ended a serious relationship moments before. The song quickly turns with her calm admission of defeat ("Stop/ You ruined all my memories") a cappella before reconvening for the song's last, and slightly more serene half.

Then there's "A Loon," featuring background yelping and a fierce vocal snarl ("Some store/ I'm not going back there anymore!/ Wandered in/ Don't think I'll do that again!") from Hersh before suddenly ending and moving on to its second half, one of the record's most simple and beautiful movements. The dichotomy between the song's two halves seems to also reflect the interchanging lyrical tones, both anchored in the kind of disgust/love that accompanies any life-consuming addiction; "Never thought I'd see that fool again/ Never thought I'd like that lunatic."

"Velvet Days" follows, situated between two of the record's more fully arranged (at least in feel) tracks, with a familiar mixture of the calmly beautiful -- the fluttering strings over picked acoustic chords and Hersh's hushed voice repeating the startling reprise of "I laughed 'til my heart stopped" -- and the uneasy instrumental bursts, as the sinister bridge comes out of nowhere to break the song in half, once again mending perfectly to match -- like the aforementioned "A Loon" -- the bi-polar lyrics, continually weaving faint romanticism ("You make that face/ You make my little day") with the more prominent air of bitterness ("We break/ Don't we break, don't we").

"Houdini Blues," much like the terrific "Sundrops" ("There is nothing I forgot/ I left that paper heart where it belongs/ Who it belonged to, I never knew"), combines one of the more accessible melodies with the least straight-forward lyrical fair, opting for a more subtle approach to the same basic themes. "Oh no, don't you put me in that box," she coyly warns, "I'll come crawling out again/ You'll have to deal with me then/ You'll hear me in the wind."

"Tuesday Night" takes a different route to the same general area, made especially intriguing by the fact that it's one of only a few songs (the title track, ending the record with a sly "Finally it's alright," being the other exception) that comes close to making us believe that things might be a little less than hopeless: Of course, we're given constant reminders that even still, she is alone, waiting for their return and the basis for such optimism seems to be, in his absence, entirely from her own imagination ("When I sleep/ I build you up/ I make you king of here/ I can't resist you"). Much like the incredible feats of denial that constitute the protagonists in "Your Ghost" and "My & My Charms," it once again walks the fine line between naive optimism and complete, life-consuming dispair.

Recorded in just under two weeks, Hips & Makers does avoid feeling like it's compromised of songs of varying ages (there isn't any one track you can label as being "obviously from her earlier days"), though considering the thematic resonance involved, it hardly seems like a matter of chance that these songs fit perfect together as pieces of the same puzzle. And true, it may not be her most diverse release (University would probably, in my mind, receive that honour), but it is very probably her most consistent and rewarding. The two short instrumentals -- "Sparky" and "Lurch," both of which add nice transitions but are far from essential -- aside, every song on the record is remarkably structured and delivered. As a fifty-plus minute experience, Hips & Makers certainly isn't as easy or accessible a listen as The Real Ramona or subsequent solo releases like Strange Angels (1998) or Sky Motel (1999); however, I would argue that she hasn't released a record since that hits as hard, or that will stand the test of time quite as well.