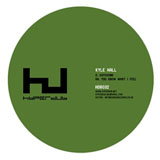 Kaychunk/You Know What I Feel EP

The TV says that Detroit is dying, and that RoboCop 3 has come to pass: houses in rubble, punks armed with crossbows, Robo driving a pimpmobile. It really is like a jungle out there, with New Center Stamping an inch under moss and—if those documentaries are to be believed—escaped snow monkeys colonising the tree that’s punctured the Book-Cadillac Hotel. Who the hell can put things right? Certainly not Captain Planet, who hung up his mullet once he landed a bit-part in the Harry and the Hendersons series. No, when things are this bleak, there’s only one thing you can do: send in Hyperdub.

And then they send in the dangerously young Kyle Hall, who first caused a storm for the label last year with a rip-roaring remix for Darkstar. Between then and now, Hyperdub coaxed the Motor City prodigy to deliver them this eleven minute EP, serving up a meaty double A-side that sees dubstep and Detroit on honeymoon. This isn’t the soul-searching thinkathon the label gave us with Burial, but it is just as brazen and exciting, existing in light rather than Shepherd’s Bush. Just look at the comic skit that’s been prepared for the vinyl sleeve art: there stands a girl draped over the nineteen-year-old Kyle’s aerobicise abs, “Kyle motherfucking Hall!” abbreviated above her in a speech bubble. That should prepare you for “Kaychunk” and all its skittery beats over deep and mewling keyboards; its bass hooks tumbling like blocks of Duplo; its melodic loops and ode to baby house. The most summery release I’ve heard this year, its crystal revolutions glint like wing mirrors as Hall dips between pools of synthetics, bathing his drum sequences in pads of loveliness. If you’ve ever speed-completed Bugs Bunny Crazy Castle (1990) after a breakfast of Peruvian Root you’ll strike up a kinship with this one—thirty spins and it still feels fresh enough to make me want to change my t-shirt.

The sister track, “You Know What I Feel,” pushes the perfect summer vibes even further, making Kaychunk of the few Hyperdub releases you could get away with playing on the beach. In the day. This is warm stuff, and the blocky sound that’s become Hyperdub’s insignia here gets duskily tuneful, tying low-end yawns around a breezy little greetings chip. The result is one sensual and toe-stretching instrumental, and to think the brain that conceived this shit wasn’t itself conceived till post-eighties acid wipeout seems impossible. But Hall nevertheless manages to fuse chunky Aphex Twin beats with old school Motor City house, putting rays of light down on that inner city vegetation. If you think the dubstep craze is all about who can shove the most gunk through a speaker, I strongly suggest investing in KMFH extremely F quickly: he’s doing things with his origins that’d make a Creationist scream, and he’s not even old enough to get served shandy.