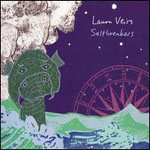 At some point between the pretty-impressive Picaresque (2005) and the kind-of-underwhelming The Crane Wife (2006), I stopped giving a shit about the Decemberists. I probably listened to The Crane Wife maybe two or three times total and passed on the live show when the band came through town. It's just as well. Had I gotten really into it, I probably would've noted Laura Veirs' appearance on "Yankee Bayonet (I Will Be Home Soon)," been bored by a forced, lackluster melody, and passed on her solo albums. That would've been a mistake.

Veirs, like the Decemberists, has refined and honed her sound since a lo-fi, bare-bones beginning. But while Meloy and Co. have become increasingly interested in gloss and simplicity, Saltbreakers is Veirs' weirdest record yet. Complex and ornate, it drapes the singer/songwriter's straightforward melodies in elements ranging from the Eastern string arrangements on "Ocean Night Song" to the static-y drum machine backing her on the John Vanderslice-like "Don't Lose Yourself." "Drink Deep" has a swaying, hypnotic quality in its repetitive chord changes that hints at a liquid beyond "water gasping for your mouth"; with a little more Memphis soul, it would've fit snugly on Cat Power's last record.

Veirs has carved herself a nice little niche in the folk-pop scene: more fun than singers such as Julie Doiron or Nina Nastasia, she's not as quirkily off-putting (and inconsistent) as Regina Spektor, and sonically she's more full-bodied than any of them. Having a major label budget behind tracks such as the clap-happy "Pink Light" and the joyous title track certainly doesn't hurt. And her straightforward delivery keeps the songs balanced. "Saltbreakers," in particular, wouldn't sound too out of place on a late '90s mixtape sandwiched between Lisa Loeb and the Barenaked Ladies. But don't let that deter you! Veirs accomplishes the rare feat of matching good humor with serious musicianship, never falling into the traps of novelty or full-plumed pageantry that have marred a number of notable folk-oriented releases over the last few years. (Here's a hint: rhymes with "Oof-yawn.")

At the same time, despite a number of stand-out tracks and nary a dull moment, Saltbreakers lacks the ambition that distinguishes records like Sufjan Stevens' Illinois (2005) -- or even my pick for the Decemberists' high-water mark, Her Majesty (2003). Veirs' songs are content to be four-minute pop numbers that exude hooks and instrumental magic; her album is content to be a collection of these songs, with no big finish or three-act dramatic arc. The songs share a fairly obvious common theme -- nature -- but make no real attempts to knit themselves from patchwork to quilt. Not much of a knock, all things considered, but it still leaves Meloy the indefatigable narrator a few lengths ahead of her on their epic journey across the sea.