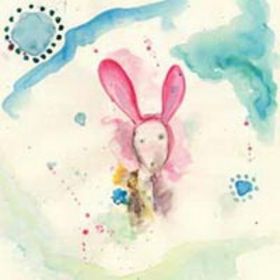 The Lava Children is Sherri West and Taylor Clark, and so we’ve got another duo—and a couple, no less—on our hands. I’m not the first but only the latest to ask an obvious question: is the proliferation of all these best buddies and special someones the best thing for music? Should a band’s music be the equivalent of a secret decoder ring’s contents, or isn’t the best of it the product of a process that is interrogative, hard on itself, challenging? Furthermore, do we have any right to horn in on what seems like a pretty sweet, if uninteresting, love-in? If the exegesis of great songwriting partnerships is as much antagonism as shared vision—the struggle of massive egos and contrasting goals—isn’t all of this love and harmony just a shortcut to insipidness? Or, to put it more kindly, isn’t this just none of our business?

Well, not yet I guess. Handsome Furs are alright, Mates of State and White Stripes and Japandroids (not a couple) aren’t terrible, and Matt & Kim are actually legitimately good. Four Spells, the debut EP from the Lava Children, is easily slotted in with these other effortless records, unstrained and performed with all the knowingness of niche artists because of what I guess is Sherri and Taylor’s spiritual, cosmic connection and the fact that they see each other naked on a regular basis. This is indie rock, albeit there’s an edge of psychedelia that one is initially fooled into hoping will continue to sound like Deerhoof and then doesn’t. “I Am a Pony” is complete misdirection, actually, all lightness and fun and promise that is too short and then over.

The Lava Children’s bio makes reference to LSD and Syd Barrett and other things that maybe they wouldn’t if they knew their audience better, but the band’s honest, staggering earnestness has to be noted. This is surely the fruit of a passionate labor. It’s just that I think that passion is for each other, the band itself of a symbol of something shared. This isn’t for us, the listener; this is something cute for Sherri and Taylor. Otherwise they’d be putting these formulas through something much tougher than they are, subjecting their relationship to the uncomfortable wringer of artistry’s unforgiving requirements.

So, barring some Fleetwood Mac-like intrigue while on the road, the listener is put in the position of complete asshole, the guy who hopes that troubled waters are ahead for a couple I’d probably otherwise like to hang out and eat vegan food with. I don’t wish Lava Children any harm, of course, but it seems like the only way they’ll get good—and this half-baked cauldron of ideas isn’t there yet—is for each to hold the other accountable as artists first and as a friends and lovers and whatever second. And that’s a pretty tough thing to ask of a couple.