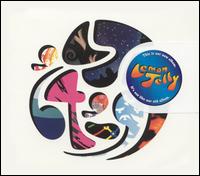 Tweet
And God said: “I have made this record, and it is a record that will fucking rock, so behold!” And indeed they stood nervous and beheld, and they did shit their pants when “Come Down on Me” laid down its lightning bolt of an opening guitar chord, and did make them tremble with its ass-kicking break beat and electro-hooks. And the smoke did swirl and they did chant with the metal-goth madman when he sang, “Come down / Come down / On me,” and then they felt the ground rumble with the thickness of the beat of break, and breathless did they confront God, who said unto them: “Does this not rock, bitches?” And they did shake. And they did shimmy. And air guitar, too.

And upon hearing “Go,” they did rejoice at the Massive-attack makeover that did culminate in a most righteous descending overdriven finale, and did clonk their heads together in baffled joy. But then, confusedly, did they find that, contrary to what they had been promised, ’64-‘95 did not, in actuality, truly rock. For it was not God, but merely a Brit-duo, of a vaguely sexual moniker, Lemon Jelly, that did laughingly emerge from the smoke as teasing tricksters and concoctors of the album. And one of the audience did scowl and punch someone out of frustration, and sat down to write a pissed off (initial) review.

Because, really, what the fuck. M83 have already released a great album this year, and electro/electronic rock what-have-you is the wave of the future, right? So is it really so wrong to think, “Well surely these two Lemon Jelly tracks would only be a hint at the great grandiose mega-music to come”? Apparently so, because most of ’64-’95 does not fucking rock at all. Instead we get Royksopp-revisited. Which is nice and pretty. But man, when “Come Down on Me” loomed over my gleefully terrified ass, I was expecting something huge.

As for the implicit concept of ’64-’95 --- samples mixed and made into songs out of really obscure, possibly crappy records between said dates --- don’t worry yourself over its integrity. In reality, the overwhelming majority of the album’s samples aren’t unique enough to be distinguishable from hundreds of other records --- including various airy tones and piano tinkles, as well as the occasional keyboard. The beats, as it turns out, are all unmistakably modern breaks. So the ostensible mix-and-mash concept really translates into: “Taking largely anonymous samples and mixing them atop modern beat-making.” Very avant-garde, guys; that “concept” surely hasn’t been done in the history of techno.

There are, of course, two exceptions, and they also happen to be the two vengeance-of-God tracks on ’64-’95: “Come Down on Me” and “Go,” which put the Chillout-compilation-bound remainder of the album to relative shame. The smart sampling of “Come Down on Me” intermixes a slick set of smacking riffs into a hook-dominated techno progression, eventually culminating in a blistering sampled hook. “Go” builds a tapestry of Massive Attack-emulating progression until after a sinister “A moment later” vocal sample pushes it into an immense, descending chord progression that flattens the majority of the electro scene.

Which is not to say that the rest of ’64-’95 is offensive or even low-quality. “Don’t Stop” is a superb build of melody and layering until its sparkling climax of interlocked sonic ideas, and despite the ill-placed jarring jab of “The Shouty Track,” the album finds a shagging stride with the soulful, progressively intesifying “Stay With You.”

The only sticking point of these other tracks is their clean, effortless and anonymous feel, which only mark the album’s two standouts as the direction in which you wish Lemon Jelly would go. As a result, the rest of the album is initially something of a let-down. Like popping two ecstasy pills and having the high fizzle out in ten minutes. Regardless, a bit of close listening and appreciation of its other tracks do yield pleasurable, if heavily chill, results.

So it essentially comes down to the fact that “Come Down on Me” and “Go” are likely going to be two of the best tracks of the year, but that a great deal of ’64-’95 is less likely to stick to memory. That the rest of ’64-’95 doesn’t measure up to the ambition of those two tracks is simply a bit of strictly relative disappointment. But hey, that’s why the “repeat” button was invented.