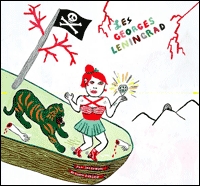 Tweet
Les Georges Leningrad operate as if they are the only ones who have heard of this whole no-wave/ post-punk thing that happened back in the day. And, in a genre that should be utterly played out right now, maybe that’s the way to do things. It’s certainly led to an album that, while clearly channeling the same sources as a lot of contemporary acts, sounds decidedly esoteric and if not fresh, then at least alive. L.G.L. take on the whole no-wave dance thing with few pretentions and filthy intentions, churning out a dissonant, yet rhythmic racket.

Les Georges share Alien8 Recordings label-mates’ the Unicorns anything-goes attitude when it comes to constructing songs. But where that means fucking with song structures and pushing pop boundaries for the Unis, it means fucking with guitars they can barely play, pounding out primal beats and pushing boundaries of taste for L.G.L. Whether you can put up with such "playful" experimenting will go a long way towards determining how much you’ll like this album.

For brave souls, there are some definite treats in store. Kicking things off is “Missing Gary,” a driving, slow-burning ditty that starts with a conversation about a band member who won’t relinquish his position behind the wheel that builds menacingly into a horror dance song that channels that infamous Nine Inch Nail drum machine beat from “Closer.” It’s a maddening opening salvo though, as L.G.L. never quite return to that stylized, slow, idiosyncratic song that suits them so well.

I’m not as sold on Erase Errata/Adult/Brainiac sounding songs on the album like “Sponorships,” “Supa Doopa” and “Wunkerkind #2.” Singer Poney P. She sounds like quite a few other fucked-up would be no-wave princesses and it doesn’t do too much for me. The songs surrounding her screeching and pleading sound a bit tired---they’re just a little too repetitive and seem to propulsively riff on the same beats without going anywhere. They’re jams in the yawn-inducing sense of the word: the atmosphere is thick with all the right things but not much is happening. The worst thing about the numbing jams is that they drown out potentially interesting personalities that only poke through occasionally. Then again when the personalities surface to tell me they’re “on a train with John Coltrane,” backed by a mangled sax, maybe they’re better off drowning under their thick stew of trash rock.

The last two songs on the album redeem matters a bit. “Fifi F.” is a hot, throbbing dance song thick with She’s antics that trails out with a faint minor key pseudo guitar solo. “Fifi F.” rocks in a way that the rest of the album seems unable to. A savant xylophone exhibition in “Comment Te Dire Adieu?” ends matters on a more subdued note. I wish there were more songs that allowed them to experiment with song structure as much as they do in these final songs.

In the end, Les Georges Leningrad have shown a willingness to experiment that is admirable but not the songwriting (outside of a few songs) or chops to carry out such experiments. I can appreciate the shambly arrangements and uber no-fi sound they’re going for, but if you don’t have an album full of songs like “Missing Gary” to record, there’s really not enough to make it consistently interesting. L.G.L. have a legendary live show and, unfortunately, the power and charm they hint at here will remain a legend if they remain unable to capture it in actual songs, as well.