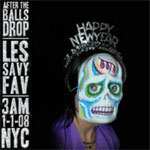 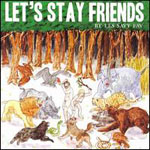 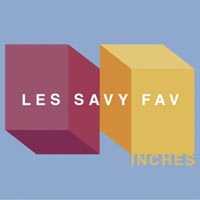 Tweet
This is Les Savy Fav to the max, bitches!

Look at that, man, eighteen tracks? You’ll be gasping for air by the time it finishes up. Shit, will it finish? Who knows, maybe it will be that endless cab drive in New York, the one where the driver can’t find that destination that you insist must exist because it’s on that brochure that skirt gave you. Your cab driver’s name is Morty, he’s a nearly thirty-year-old Jew, and he’s listening to Inches.

Morty loves Les Savy Fav, and he’s collected the nine 7” that make up this compilation of sorts. Morty had to have them officially compiled on one CD, though, and with the DVD with all the live footage and shit. Morty was at that show, in fact, where Tim Harrington freaked out with a stuffed bunny. Morty walked into a Best Buy or some such outlet from which musical goods can be purchased and picked up the compact disc with the soft color art. He read out loud the back of the case: “In 1996, before we had put out any records, Les Savy Fav had begun Inches. We designed Inches’ cover art and broke it into nine parts to be released as related singles…”

“I take this mic and spike it to the ground! The lightning’s bad, but at least it’s not loud!” Jody dances in a Misfits wife-beater on top of a bed strewn with cigarette stubs and an unused rubber. Jody’s saving for her boyfriend Brody, a nearly thirty Jew who always forgets to bring his own rubbers. The whining guitar gets Jody in the mood for some lovin’ as her half dozen family of body piercings jangle like sleigh bells. “Meet me in the dollar bin! Meet me in the dollar bin!” By the time Brody walks in, Jody’s lying with her gyrations and holding on to her genre. A chiming guitar chips divots in the air’s grass atmosphere. It’s romantic in a twisted way. Brody moves in, they start to spoon, and …

Dear diary, it smells bad in New York City after rain, so I am grumpy. But yesterday, I stole a Walkman. It had a CD in it already. It’s a pretty good CD. It’s strange, but it makes me move. It keeps me warm at night… that’s when I listen to it the most. My favorite songs are 5 and 6. 5 makes me jump and yell. It is fun. I pump my fist, even. It talks about sweat and dance floors and a party and some other nice things that I like or I think I would like. Excuse me, I need to make sure no one’s taken my shopping cart. Okay, it’s still there. 6 is also good because it has the line “papa don’t preach,” and I like that because my father was a rabbi and he always talked to me about…

“Hello Halo, Goodbye Glands. Dammit, I am a sexual being, not an angel, Martha. Martha, I don’t care if this rock music is too sensuous for you. Martha, this track isn’t even sensuous, what are we talking about. Just because we’ve been married for forty years, you expect me to acquiesce to your every demand, well, Martha, I’ve had enough of your shit. Oh, shut up, I’ll swear if I like, dammit. Now, if you’ll excuse me, I really get into the moody, clanging post-punk of this ‘Obsessed With The Excess’ song. Yeah, you might want to step back, Martha, I wouldn’t want to hurt you. Or me, you might end up…”

ONE WAY WIDOW (Lyrics from the CD booklet) - “She was sweet sixteen, baby beauty queen. Straight white teeth, bathed in beauty cream. Priss don’t drink and priss don’t smoke. Shit don’t stink and don’t take jokes. Botoxed in bobby socks. Cold as ice. All the boys were like white on rice… You’re so vain I bet you don’t think this song is about you.” Brody looked up from the lyrics in the booklet and mused to himself that he was listening to something like Fugazi screwing Carly Simon. Just then, Jody tugged on Brody’s sleeve, but Brody said “yawn, yawn, yawn” and showed her that he had…

“No Sleeves! No Sleeves!” Jerry wandered through the department store’s clearance section looking for a nice summer shirt. He wanted a shirt with sleeves, and he could not find one. Well, he did find one, but it had been embroidered with a black bear that had a muzzle on its face. Jerry most definitely did not want that shirt. Jerry espied a gorgeous female with a name tag which he promptly read like so. “Maggie, could you help me over here?” Maggie walked over. Jerry said, “None of these shirts have sleeves.” Maggie pointed out the sleeved shirt with the muzzled bear, and just then Jerry noticed the fuzzy yet melodic rock coming over the store’s speakers. Jerry: “What song is that?” Maggie said something about a reprobates resume. Jerry: “Hey, what sort of place is this anyways?” Maggie said that it was sort of counterculture, Jerry screamed and…

“Blackouts,” said Morty, “I’ve always liked that track. That’s the new New York punk rock. Simple, pounding, passionate, hip.” Martha sits crying in the back of Morty’s cab, the music bringing back the terrible events of the week before. Morty pats her on her wrinkled, floral-dress-covered thigh. “Don’t worry, this is the last track. ‘Rodeo.’ It’s pretty fucking sweet, and that’s coming from a nearly thirty Jew.”

This is Les Savy Fav to the max! Can you handle all eighteen tracks of its splendiferous, moshable art punk? Maybe, and it’s worth it, but you’ll be exhausted off your skinny white hipster ass, man. But what are you gonna do, you gonna tell them to change something? It’s an endless cab drive in New York; shit don’t change unless you piss on the vinyl.