1. Atlas
2. Yeti
3. Can I Say Something To You?
4. The Streets Themselves
5. Nothing Collapses
6. Where Is the White?
7. Fragments
8. Searching Now
9. Boiling Springs
10. Certain Types of Conversation 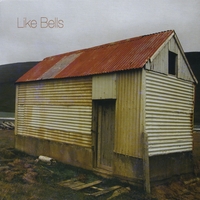 Like Bells is the product of students from Oberlin College’s music program, and it sounds like it. Which is to say, yes, perhaps there’s stolid technicality and busywork all over the damn place, and maybe there’s less complementing going on than showing off—I’m looking at you, The Drummer—but there’s also a sort of effortlessness of melody about the thing that makes it difficult to really begrudge them their enthusiasm. The image that comes to mind is the high school talent show: in between Green Day and Sublime covers there was always That Band, the one with the really talented music kids who’d perform something they’d written themselves. And for all their raw skill, with which they’d easily outperform everyone else, they still sounded unsure of what they wanted to be, of who their music was for. And so, while blowing the Green Day cover band off the stage, they’d sound somehow less purposeful than them. The Green Day cover band stated their love of Green Day and connected with other Green Day fans; the music nerds’ bands, so dependent on the technicality of their performances, became entropic and lost themselves to endless escalation and meandering.

All of which is to say that Like Bells are some supremely talented individuals who occasionally enter into the realm of the virtuoso wank, especially in the album’s latter half. But they also reaffirm the notion that to identify a first time writer, be it of music or prose, all one has to do is watch for those who eschew smallness and try to make something self-consciously important-sounding. Like Bells just sound ambitiously, naively young.

The whole thing is a bit of a throwback to nineties instrumental bands, if a good one. These performance heavy songs recall the better of those bands, Pele or the Mercury Program rather than the occasional histrionics of Anathallo or Balmorhea. Arrangements on “Atlas,” “Yeti,” and “The Streets Themselves” are tight and to the point. I especially appreciate their decision not to include a mid-album piano ballad, which lately has seemed like an obligatory gesture among kids out to change the world. In fact, the album’s first half is markedly consistent, with the sort of efficiency of noise that turns highlights into lessons learned that are spread throughout.

I don’t mean to pick on the drummer, but he does turn “Where is the White” and “Fragments” and “Searching Now’ into drum clinic stompers, and he’s the first to lose the pack. Where current instrumental favorites like Chemtrails might have let the melodies develop, he tends to bully them along. On “Fragments” his drum work actually seems to preempt an easy pizzicato moment that I’d like to have heard more of, and soon after he’s off to the races on a minute long, fill-heavy crescendo. The latter half of the album often spirals into many dramatic crashes and tom work the likes of which aren’t hateable and yet are predictable enough to leech the songs of their gravity. Guy: relax.

Not to sound like I’m giving them a pass, but this is a debut after all, and Like Bells sound like a band who are treating it like their one and only shot. Who can blame them? But what keeps them from reaching those transcendent planes, spaces treaded by visionary bands like Efterklang and Jacaszek and occasionally Bell Orchestre (to say nothing of the Phantom Zone where Kingdom Shore rules supreme), is the ability to patiently build on themes, experiment with subtleties like texture, and to know when strategic forbearance of sounds can be as powerful as rocking the fuck out. It’s hard to ask much more of these performances, and if enjoyed purely on that level Like Bells is an exciting and accomplished band. But I’d like to see them think past the performance to the next song, to the next album, to what they want to say when that time comes and why.