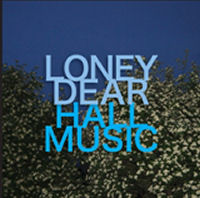 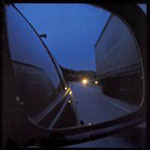 The story goes something like this: Loney, Dear is Emil Svanängen, a Swedish folk-pop musician with several self-released CD-Rs to his name. Up until now, Loney, Noir was one of them. Add it to the list of buried treasures dug up and reissued by Sup Pop: in recent years, the label has plucked such albums as Rogue Wave's Out of the Shadow (2004) and Chad VanGaalen's Infiniheart (2005) out of obscurity and given them a proper position among indie rock's elite, not to mention last year's excellent Dead Moon excavation. Loney, Noir is a worthy addition to that ever-growing canon. Equal parts Sufjan orchestration and twee-pop sincerity, Loney, Dear's label debut is a winsome, celebratory chamber-folk opus.

Like Stevens, Svanängen is a home recordist -- a great one. While indie-folk and lo-fi were synonymous as recently (and effectively) as the Microphones' The Glow, Pt. 2 (2001), Loney, Noir is as crisp and clear as a winter morning. And also like Stevens, the polished sound serves the music well, leaving the wide array of instruments easily and enjoyably discernable. Beyond that, though, Svanängen's music follows its own path. As well-produced as they are, the songs never feel dependent on the arrangements. The sound continually adapts to the needs of the songs, and the results are often unpredictable: On "And I Won't Cause Anything At All," he sings, "Don't start something now" -- it's the last song on the album and first to prominently feature electronic percussion. Many of the tracks follow a slow unveiling process, as on "I Will Call You Lover Again," where the drums join a keyboard before the "band" (the band being meticulous Svanängen overdubs) comes in; as the second verse starts, wordless backing vocals sing out against a plodding bass line and grow more and more ecstatic. "I'll call you lover again," he sings, his passion building as the ever-expanding song blooms.

At heart, the album's ten songs are centered on Svanängen's voice and guitar, though what's happening on the periphery is just as compelling. "I Could Say" keeps things toned down for a while, though, like every song of Loney, Noir, it can only restrain its musical exuberance for so long. If it's not clear by now, Svanängen is quite the musician: aside from some drum parts and extra backing vocals, every instrument -- from guitar, bass and drums to saxophone and clarinet, as well as electronic touches -- is played deftly by the multi-instrumentalist. The array of sounds certainly freshens up the standard singer-songwriter shtick; one could listen to Loney, Noir a dozen times just following the instruments strain against each other. The production would be a hollow achievement without worthy songs, though, and Svanängen brings them in spades.

Many of the tracks are sweet, shambling waltzes, moving briskly forward as Svanängen's vocals jump easily into falsetto. He has a bright tenor that borders on fey and nods discretely at twee, especially when he hits the upper register, but he's too confident a singer to be mistaken for another Stuart Murdoch imitator. "I Am John" sees him straddling a range of styles, from emboldened rock emphatics to the keening, multi-tracked falsettos that usher in the song's bridge. On that track, his words (some adequate nonsense about love and dancing and not letting you down) tumble over each other; "I Could Stay" sees him stretching out notes as the waltz threaten to outpace him.

The songs gain a necessary intensity from their lively pace. Folk music's usual weakness is its slow, stubborn strumming, but the exuberance that permeates the arrangements carries over to the songs' tempos as well. There's the occasional ballad, including the quietly acoustic album opener "Sinister in the State of Hope," but most of the album is on the faster side. Even "Sinister" adds a rhythm section halfway through. No matter how languid the melody gets on "I Could Stay," for instance, there's a nimble beat underlying it. "I Am John" moves quickly, fitting its tumbling-out feel, while "Hard Days 1.2.3.4" benefits from handclaps that propel the song into a relatively noisy chorus: "I'm a teenager / I'm anxious!"

Anxious he may be, but the music of Loney, Dear is never shy. Thanks to Sub Pop, Loney, Noir is a deserved coming-out party for a musician with a sparkling back catalog and what's looking to be an even brighter future. There's a lot to be impressed with here, but it's the emotional intimacy that the songs establish even at their most grandiose that makes the album great. It's hard to imagine anyone listening to this record and not giving Svanängen his due; it's even harder to imagine anyone playing this kind of music topping it soon.