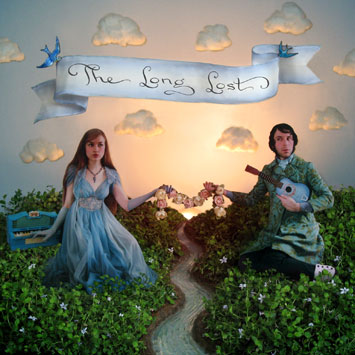 We’ve all known that one couple, the kind whose love seems to be something supernatural, who make you believe in soulmates and then curse the fact that you will probably never find yours. Now imagine if that couple had a flair for the classic(al) and a tiny flame for the experimental, then made an album. Enter the Long Lost: a collaboration between Alfred Darlington (aka electronic puck Daedelus) and his wife Laura. The two were high school sweethearts, separated for a few years, and were then brought back together through that same cosmic direction of fate that makes me bang my head and grumble after every disastrous first date. And I’m a music snob, so I’ve had my share.

Laura handles the majority of the vocal duties here, and her breathy whispering is well-suited to the music. Predictably, subject matter is dominated by whimsical explorations of the mundanities of life and love—like the hidden magic in the art of kissing, or 20/20 vision as a metaphorical device. Laura is a sympathetic character, and her gentle coo is mostly inviting, like Björk minus the obvious neuroses, at bedtime with a cup of tea. Likely due to the influence of an audio trickster like Daedelus, whose fascinations with psychoacoustics and circuit-bending are well-known, we get some little vocal jokes here and there—“Sibilance” ends in the recitation of “she sells / sea shells / by the sea shore,” the kind of phrase that haunts every good studio engineer’s nightmares.

Every time I’ve put on The Long Lost, it seems to go the same way: I start out enraptured and end up yawning and searching for the most aggressively engaging music I can find. The Darlingtons are talented musicians, and this album makes a good case for them as a surreal indie reflection of Richard and Linda Thompson’s folky nuptial observations. Unfortunately, perhaps due to the Darlingtons’ immersal in their love, they sometimes make it hard for the listener to break in. I get the feeling that their back-and-forth repetition of the spelling of “colour” on the song of same name means something, but it’s just too precious and reserved to command attention. This problem affects much of the later half of the album, which is swimming in beauty but falls victim to aimlessness. Additionally, there’s the lack of timbral diversity, which becomes an issue as the album progresses. It’s a gripe I could express over much of the folky indie rock that’s presently in vogue, but when a performer as historically bright and varied as Daedelus is involved, it’s disappointing.

It’s hard to come down on an album like The Long Lost, given that it expects so much from listeners. If you aren’t in the right mood, it’ll likely just pass you by as a curiosity. If you can suspend your disbelief to listen to a flute-flanked woman chant “meow meow meow” during the final minute of the aptly-titled “Cat Fancy,” things should work out. I waver in between the two: I stand by my criticisms, but there are some beautiful pieces that bring all the promise of the collaboration to fruition, such as “Ballroom Dance Club,” where Daedelus’ light breaks waltz with Laura’s upbeat lyrics, or the achingly beautiful call-and-response on “Siren’s Song.” Inevitably, boredom, cynicism, and even jealousy may arise as issues here, but it’s hard not to be momentarily entranced by something so loving and so strange.